What Does A Shepherd Do? 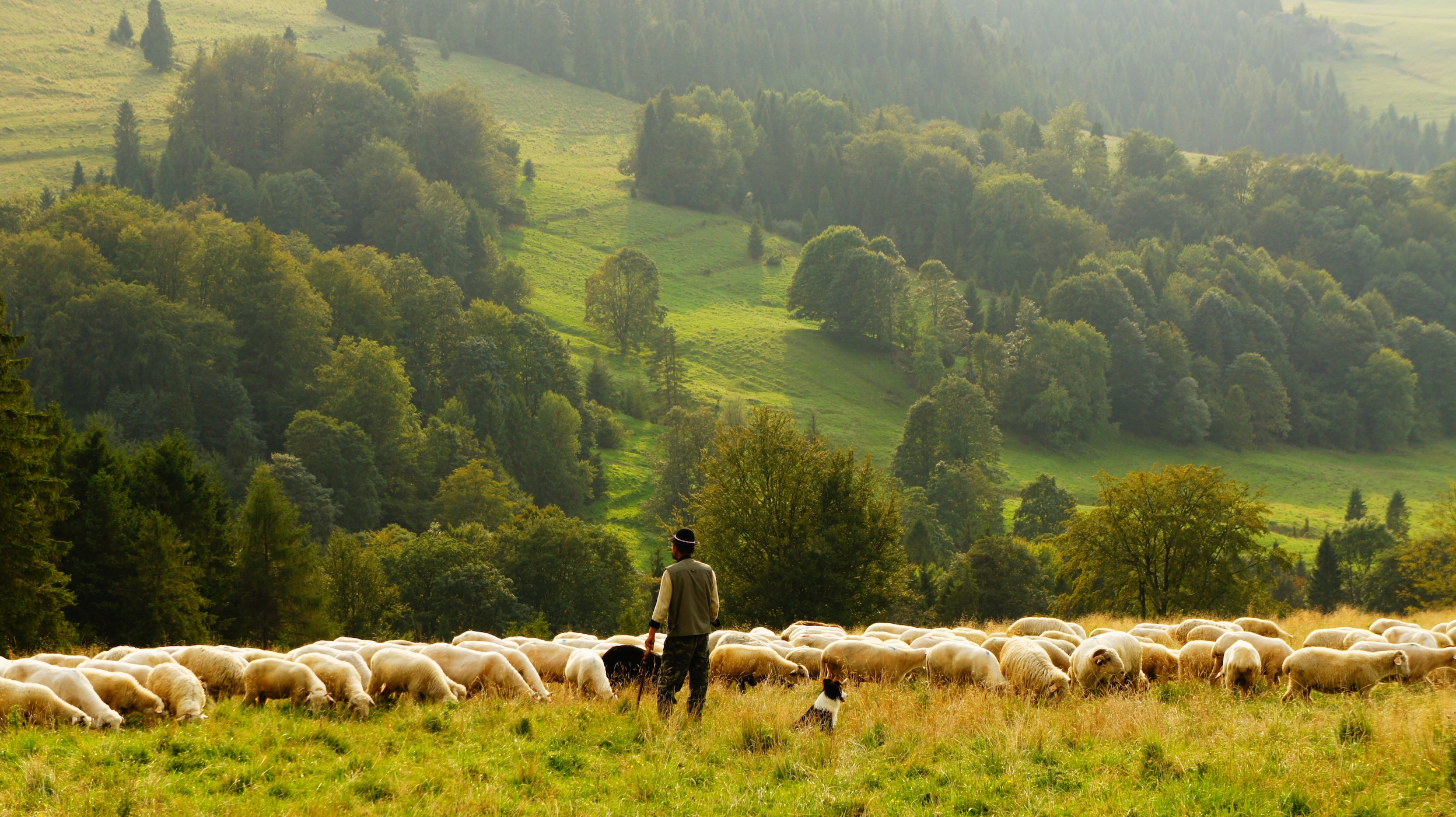 By now we are all familiar with the metaphor of a “shepherd.” We call ourselves “shepherds” and encourage one another to “lead our flock.” More than perhaps any other, Jesus uses the vocation of sheep-herding as reference for what He does for us and how He treats us. He calls Himself the Good Shepherd (John 10:1-18). He sees the masses as sheep without a shepherd (Matthew 9:36). He likens salvation to being a lost sheep carried home (Luke 15:3-7). Isaiah likens His sacrifice as a sheep led to the slaughter, and to us as straying sheep (Isaiah 53:6-7).

I use this language often, but I recently realized that as a 21st-century man in a Western context, I have little-to-no idea what this actually means. Aside from going to a petting zoo when I was in elementary school, I can’t say that I’ve ever touched a sheep or been close to one. I don’t spend time observing them, and I don’t sit quietly on my back porch with coffee pondering their ways. I understand this huge biblical metaphor only in meager terms: “Sheep need to be led … ?” I know there’s more to it, but I admit that I don’t really know what else there is.

One of our pastors recently turned me on to a book entitled, “The Minister As Shepherd,” by Charles Jefferson. It’s a small, quick read, and Jefferson does an amazing job laying out what an Eastern shepherd is and what he does. It may be fruitful to hear and heed his words as we consider our callings and professions to shepherd the men and women of God. Just as Jesus is our shepherd, we are His under-shepherds, called to lead those in our care. (Note: From here on, I’ll be quoting abbreviated sections of Jefferson’s book.)

The Shepherd is a Watchman

The Eastern shepherd was, first of all, a watchman. It was his business to keep a wide-open eye, constantly searching the horizon for the possible approach of foes. An alert wakefulness was for him a necessity. The land teemed with forces hostile to the shepherd and his flock. There were floods, animals, birds of prey. And then, most dangerous of all, humans, birds, and beasts of prey.

Paul’s closing exhortation [to the elders in Ephesus] is “Watch!” There are two quarters from which enemies should be expected—the outside and the inside; from the world and also from the church. The journey from the cradle to the grave is hazardous. Men are to pray and to watch.

Many a minster fails as a pastor [i.e. shepherd] because he is not vigilant. He allows his church to be torn to pieces because he is half asleep. Instruction is needed to prepare men to refute challenging ideas of the Scriptures, of inspiration, and of authority; and the watchman is often looking in the other direction.

The Shepherd is a Guard

A shepherd in the East was also a guard. His mission was not only to oversee, but likewise to protect. He was a guardian of the sheep. He was their defender. Sheep are among the most defenseless of animals. Their helplessness is pitiable.

Everything that the Psalmist calls God, a sheep might call its shepherd—its refuge, its buckler, its shield, its rock, its fortress. The safeguarding of the sheep is a prime function in pastoral work.

We have spent too much time in coaxing half-dead sheep back to life again, and not time enough in building barriers against the wolves. The losses of the average church are appalling, and one reason is that life is not properly protected.

The Shepherd is a Guide

The shepherd is also a guide. Sheep are not independent travelers. They must have a human conductor. They cannot go to predetermined places by themselves. They cannot start out in the morning in search of pasture and then come home at evening time. They have, apparently, no sense of direction. The greenest pasture may be only a few miles away, but the sheep left to themselves cannot find it. The sheep realize their impotence, for no animal is more docile. Where the shepherd leads, the sheep will go. They know that the shepherd is a guide and that it is safe to follow him. The shepherd cannot drive the sheep, he must lead them.

The poet who wrote Psalm 23 thought of God first of all as a leader. God goes ahead and finds the streams which are sweet and the pastures which are fragrant. Some ministers try to drive. Their fatal weakness is an inability to see that shepherds cannot drive. A minister must always go in advance of his people. He must lead them in thought. It is tragic when a minister is not the intellectual leader of his people. A minister who does not lead is shirking a capital branch of pastoral work.

The doors of opportunity stand open, but the average Christian will not enter unless encouraged. A leader is not an exhorter, or a scolder, or a declaimer, but a man who goes ahead and points out the particular things which ought to be accomplished, and not only points them out but also shows in what manner they may best be done.

The Shepherd is a Physician

A shepherd in Israel was a physician to the sheep. There was usually at least one of his sheep which was lame and ailing, and upon this invalid the shepherd bestowed more abundant care. The nature of his calling compelled a shepherd to be a doctor and a nurse.

Jesus the Good Shepherd always regarded Himself as a physician. The diseases of the soul are numerous, and the remedies provided by the Almighty are efficacious only when applied by a skilled practitioner.

Here is a field in which the minister is called upon to put forth much skill and strength. His mission is to the sick, and not all sick people are sick with the same sickness, nor do they all require the same remedies or the same kind of nursing. Followers of Jesus in many cases suffer for years with diseases from which an expert spiritual physician could have delivered them. Nowhere else does the minister need such piercing insight, such fine powers of discrimination, such skill in diagnosis, and such ability to cope with subtle and mysterious forces, as here.

It is both Christian humility and common sense for a minister to work hand in hand with men who have learned God’s laws in other provinces of His vast kingdom [ie. medicine], and to avail himself of whatever God is willing to render through them. The physical health of his people is always a matter of concern to the instructed pastor.

The Shepherd is a Savior

The shepherd is a savior. He saves sheep that are lost. A critical part of the shepherd’s task is rescue work. Sheep have a propensity for getting lost. They get lost their through stupidity and also through heedlessness and folly. A sheep will keep his nose to the ground following the strip of greenest grass, little by little separating himself from his companions, until at last, his companions are completely out of sight and the poor isolated animal doesn’t how where he is. When once he realizes his lost condition, he rushes hither and thither seeking his way, but his search is generally fruitless. A lost sheep does not get home.

The minister who allows one sheep to drop out of his flock without a wound in his heart and without lifting a hand to bring that sheep back is not a good shepherd.

The shepherd who left his ninety-nine sheep in the fold and went forth in search of one sheep which had wandered away was held up by Jesus as an ideal and example.

There are ministers who do have a passion for the lost, but only the lost of one particular type–men and women who have never belonged to the church. All sorts of devices are adopted to catch them. When any of them are won, that ends the interest of the minister in them. But alas, many of those who have been found soon wander away. Straying sheep could in many cases be brought back if only the shepherd would go after them. The minister who allows one sheep to drop out of his flock without a wound in his heart and without lifting a hand to bring that sheep back is not a good shepherd.

The Shepherd is a Provider

The feeding of the sheep is an essential duty of the shepherd. Sheep cannot feed themselves nor water themselves. They must be conducted to the water and the pasture. The grass varies with the seasons, and the shepherd is ever changing the location of his flock. Unless wisely fed they become emaciated and sick. Jesus claims to be the Good Shepherd, and one of the grounds of His claim is that He feeds.

While it is universally admitted that the minister must feed his people, it is surprising how little attention is paid by many a minister to the subject of nutrition and how little thought is given to the art of feeding. There is in every church a wide variety of ages, temperaments, appetites, tastes, and constitutions, and a great variety of foods prepared in different ways is consequently demanded. The problem of problems is how to feed all these different kinds of lambs and sheep on food that will be suitable for each one.

[Consider this next bit in light of your calling as a worship leader as well as a “preacher.”] The curse of the pulpit is the superstition that a sermon is a work of art and not a piece of bread or meat. Sermons, rightly understood, are primarily forms of food. A shepherd has his eyes upon the sheep, and his first concern is that the sheep shall have enough to eat. Feeding sheep is not romantic. It is not an act which can be done with a flourish. It is well for a minister to ask himself now and then: “Am I keeping the people too long in one particular field because I happen to like the landscape from that standpoint? Am I compelling them to browse too long in my favorite pasture?”

The Shepherd is a Lover

The Oriental shepherd did one thing more—he loved the sheep. Here is a lovely touch: “He calleth his own sheep by name.” It was not necessary that he should give to each sheep a name, but he did it because he liked them. Love always individualizes. It is not love if it is not personal and intimate.

The shepherd was a lover of the sheep, and it was because of his attachment to them that in time of danger he thought not of himself, but of them. In defending them he was willing to lay down his life. This is the crowning virtue of the shepherd—his self-sacrificing love. Love is the great nourisher at life’s feast. Love satisfies.