The Theology of Worship 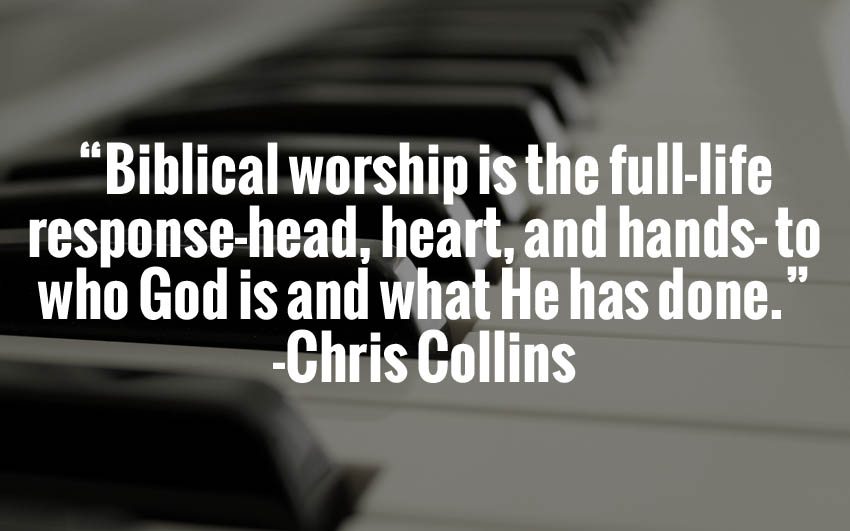 (Austin Stone Worship Note: This post is the first in a series of content from our Worship Leader Development program)‍

I am so excited to be following up Aaron’s welcome with some of the biblical background on worship. It’s the motivation behind everything we do here at the Austin Stone, and we believe worship is one of the fundamental things every Christian is called to do.

I think it’s important to start with a definition. Biblical worship is the full-life response – head, heart, and hands – to who God is and what He has done.

I get this definition from Matthew 22:37:

Notice that I included the word “biblical” in my definition. When we worship, we ascribe worth to something. We worship many things that are not God: money, status etc. But biblical worship turns that affection to God.

We were created to worship God, but once sin comes into the world, we see what Paul discusses in Romans 1.

“For although they knew God, they did not honor him as God or give thanks to him, but they became futile in their thinking, and their foolish hearts were darkened. Claiming to be wise, they became fools, and exchanged the glory of the immortal God for images resembling mortal man and birds and animals and creeping things…They exchanged the truth about God for a lie, and worshiped and served created things rather than the Creator—who is forever praised.”

We started (and continue today) ascribing worth to other things besides God.

Worship is a Response

Notice that I also use the word “response” in my definition. Before the fall, we were primarily responders. God is the actor, displaying His love for us, and we responded in worship. This is the natural order of things. Today, we attempt to be the actors, and we hope that others will respond to us.

Worship is Our Whole Life – Head, Heart, and Hands

Notice also that I said it was our “full-life” response. Even when we’re not directing our worship at ourselves, we direct it to other things.

Matt Chandler writes in his book The Explicit Gospel that during March Madness, with victory comes elation, with defeat comes destitution, before each game there is a nervousness in our stomachs, and after each one there are hours spent going over the details. He writes “Every bit of that passion was given to us by God for God. It was not given for basketball…Where is the elation over the resurrection? Where is the desolation over our sins…It’s on basketball. It’s on football. It’s on romance.”

We must make the object of worship God.

Worship is More than Music

We don’t just worship through music. Worship is much more than that. Worship should be our entire life. As worship leaders then, we’re not just leading them in song but directing their daily lives.

Prior to coming to the Austin Stone, I led worship for several years at different churches and always used to say that worship was more than just music.

I was tested in this truth when, while leading worship at a church in Columbus, Ohio, I began losing my voice intermittently during Sunday mornings. I went to several doctors and there was no medical cause that could be found.

My wife began asking me what I wanted to do if I couldn’t lead on Sundays. The job description we talked out ended up being the exact same need that my old youth pastor Matt Carter needed at his church plant, the Stone. Even though I lost my voice, this new job would have me pastoring worship leaders, and leading worship-just not from the stage. At some point every worship leader will lose his ability to sing on stage, but we are all called to lead others toward God, at all times.

As worship leaders, I challenge you to lead others in the full-life response-head, heart, and hands- to who God is and what He has done.