The Miracle of Forgiveness 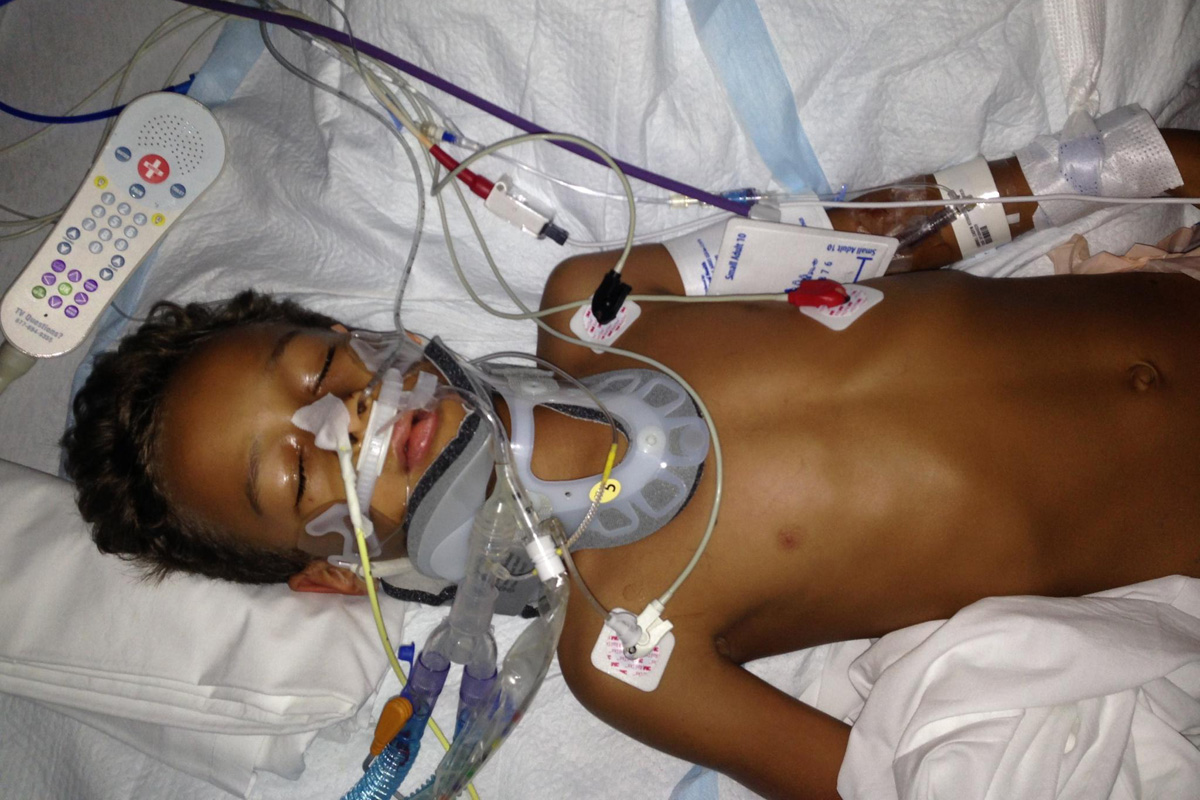 "Forgive us our trespasses as we forgive those who trespass against us."

These are simple, powerful, and even poetic words that I've said so many times without fully grasping their meanings. On July 15th, my family was given a chance to live them. An ordinary day transformed into an extraordinary test of faith.

While traveling north on I-35, we were suddenly rear ended by an 18-wheeler. We were stopped in traffic when it hit, crumbling our van like an accordion. My wife, Nikki, and I were in the front and our children were in the back, where they bore the brunt of the impact. When the truck hit, I sustained a head injury and lay bleeding in a bed of glass. My wife turned to see our oldest son, Cadyn, slumped over, limp, and lifeless. For a moment, she thought he was gone. By a great miracle of God, he was still alive... but gravely injured.

Nikki pulled our children from their car seats and handed them to strangers outside the van. In the midst of the chaos, she saw that everyone was being tended to long before the ambulance arrived. Cadyn was in critical condition and barely breathing, but Nikki had a peace that surpassed understanding that God was there.

That's when she noticed the truck driver, Roger.

He was curled up into a fetal position, leaning against the concrete divider, weeping into his cell phone. My wife felt an overwhelming sense of love and compassion for him. It was an accident. She walked over to Roger to embrace him and began to pray. At first he refused, but Nikki insisted and said, "This is what grace is for." While praying with him, she realized by his words that he was our brother in Christ.

Cadyn was immediately sent to the ICU, where our trial continued. We received news that his brain had sustained shear injury, a type of brain damage that either kills or severely impairs for life. We sat at his bedside, begging for him to open his eyes. In the darkness and overwhelming anxiety, the Lord gave us His strength to believe for a miracle.

It was during that time that Nikki reached out to Roger. He had to know that Cadyn was alive and that he was, indeed, forgiven. As I prayed about this, I felt a love for him as well. God brought to my mind numerous verses of His command to love radically and forgive freely. As our son laid there hooked up to a ventilator, we were not helpless. We could love. The enemy was to have no foothold. After leaving a phone message with the trucking company, we went back to praying and waiting.

Doctors told us that Cadyn would be in the ICU for many weeks with a tracheotomy and a feeding tube, followed by many months in the hospital. They said we would never have the same son again. Even still, we had an unexplainable joy and peace. We were not alone and none of this was a shock to our Savior. He wasn't finished yet.

A few days later, Cadyn woke up. This set into motion a recovery process that astonished the doctors and defied scientific explanation. That same day, Roger contacted us and we invited him to see God's miracle in action. Our son couldn't talk right away, but he could write. He was coherent enough to understand the situation as my wife and I explained to him what happened. Nikki asked Cadyn if he wanted to forgive Roger. I saw my son think about it for a moment, then give an assertive thumbs up. With construction paper and a crayon, Cadyn wrote: "Roger, I forgive you. Love, Cadyn."

At that moment, my little 5-year-old son became my greatest hero.

We were blessed to meet Roger and his family that day. Roger said he was framing Cadyn's note and putting it on his wall. I believe him. It was surreal to embrace the man who almost killed my son, but there was also such joy.

I remember the shocked look on his face when he told us that our forgiveness had rocked his faith to the core and that he could not understand how I, as a father, could forgive him. I told him that Jesus poured out His grace to me from the cross, and the only right response would be for me to pour that same grace out to others. Roger said he didn't know people followed Christ like this, but we assured him we're not super Christians. It's only by the power of the Holy Spirit.

As the saying goes, we're not perfect, we're just forgiven.