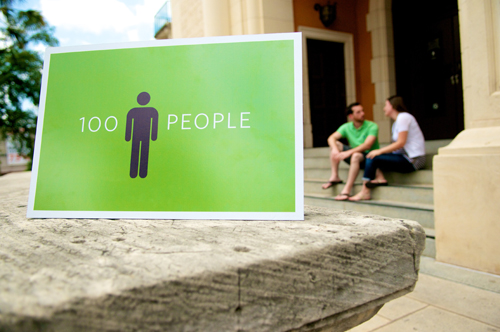 Brent and Morgan Warner always had a desire to share the gospel beyond the United States. Morgan grew up in a family that actively served in the mission field of South Africa, so she was familiar with the challenges and joys of being called to serve outside of her own culture. While in college, she and Brent worked with the campus ministry of an international Christian organization that befriends those who don't know Jesus or who are just beginning their relationship with him. In the summer of 2009, the Warners embarked on a one-month trip to Central Asia with this ministry. The journey deepened their desire to serve in a full-time capacity. As they were looking for places to serve, they found out the organization that had taken them to Central Asia was looking for young, married couples who could move overseas and build relationships with university students. The Warners agreed to serve with the ministry for the next five years in the region they had visited in 2009.

Besides having some experience and familiarity with the culture and people when they go back, the Warners will also have family nearby. They are going to the city where Morgan's parents are currently serving with the same organization. Brent and Morgan will share the word of God with the people of this unreached area along with Morgan's parents. "Going there as a family unit is such an opportunity to share God's love. In this area, more doors are open and available when people serve as a family unit. Once you meet one person here, you meet their entire family – generations of the same lineage. The people here will be more open because we present the word of God as a family to another family."

In preparation for serving these families overseas, Brent and Morgan formally studied the Persian language that is the native tongue of the people they will serve. The university professor who taught the course was from the area they will soon call home. "There are only three universities in the United States that teach this language. The University of Texas just so happened to be one of them. We were glad we had the opportunity to formally study the dialect as well as learn about the language from someone who lived there."

The people in the area where Brent and Morgan will be living have difficult lives in an environment where jobs are scarce, phones are bugged, internet usage is monitored, and electricity is rationed. This is one of the poorest countries in the region, and its economic situation remains fragile. Many have turned to heroin trafficking as a source of personal income. But, despite the challenges the Warners will face, they believe that reaching the people of this area is well worth the sacrifice. "It starts with relationships. Over there hospitality is honored. [Our first trip there] changed our view of how we live and how we serve. We can't wait to return the hospitality we've been shown and to share the word of God with these people."

The Warners will have to wait a while longer to return that hospitality. They won't be moving to the area for another year. In the interim, Morgan and Brent are serving as collegiate ministers on the UT campus. Also during this waiting period, the Warners are expecting their first child. They are excited about the addition to their family and about joining Morgan's parents next year to begin their ministry.

Psalm 22, which Jesus quotes from the cross, prophesies that someday, "all the families of the nations shall worship before [God]" (Psalm 22:27 ESV). The Warners look forward to seeing how God will use their family to fulfill this promise.