Technology for the Modern Worship Drummer 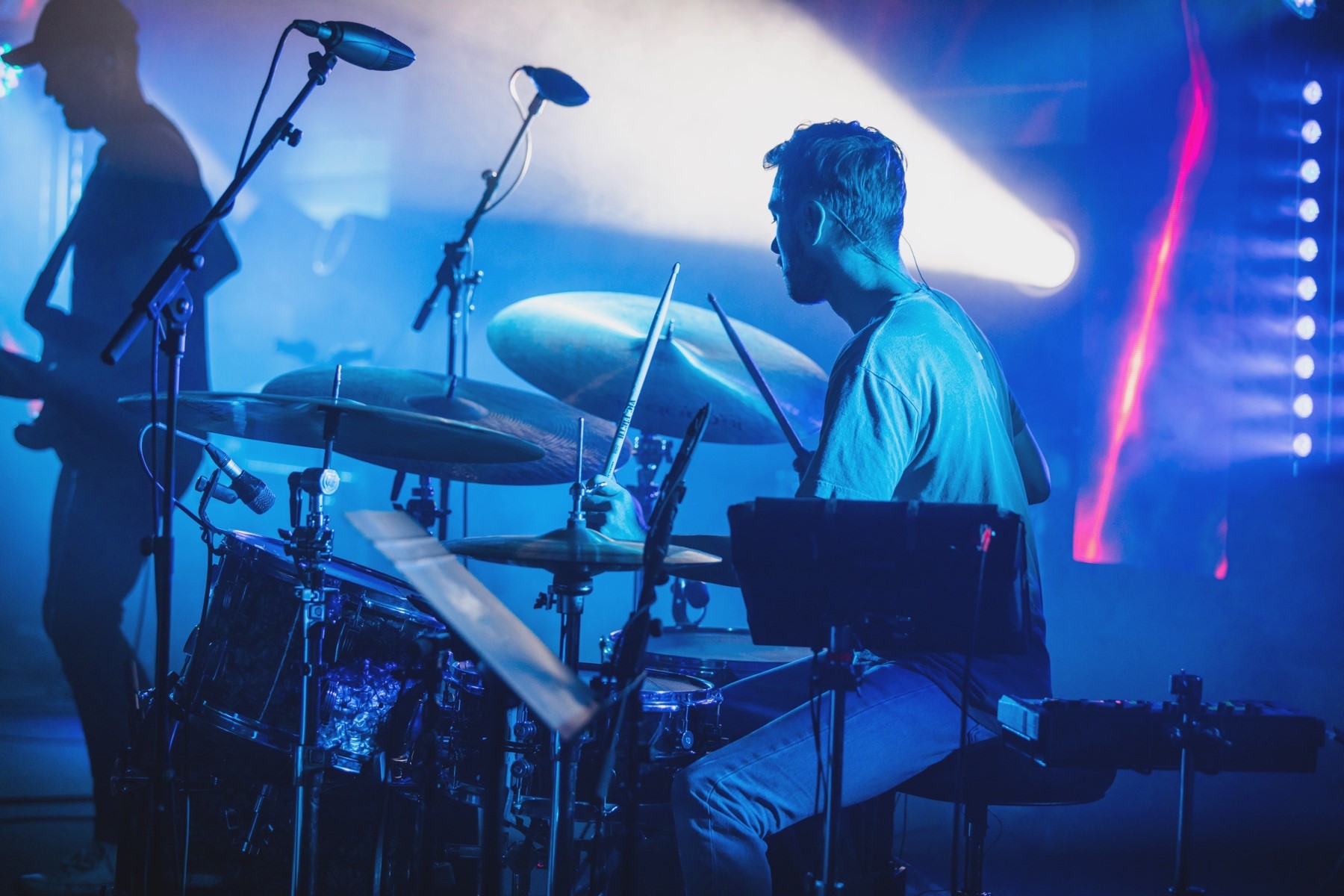 Ever since I was a kid learning to play drums, I’ve been attracted to the intersection of technology and music. Technology concerns itself with the newest inventions and drums are one of the oldest instruments known to man; there’s something beautiful about that dichotomy.

My goal for this blog post is to provide perspective. Perspective allows you to  understand your context and discern how you fit in. Before geeking out over all the details of how electronic technology can enhance a drum sound and transform a worship experience, let’s get perspective through a brief history of the drums.

Dating back to c. 6000 BC, Neolithic cultures communicated by hitting alligator skins stretched over large wooden hand drums. The use of drums spread throughout Asia, Africa, and the Mediterranean, and were used during war to communicate over long distances. In the 1300’s, we got tired of hitting things with our hands and created the drum stick (honestly, praise the Lord). By the 1800’s, during the Classical era of music, new forms of orchestral drums came into play like the snare, triangle, gong, marimba, and tambourine. Once the 1900’s hit, the drum kit as we know it today began to take form with foot pedals, cymbals, and Mylar heads.

Now here we are, in the 21st century, with 512 GB iPhones and cars that can drive themselves. Perhaps it’s time to rethink the way we play drums.

As we dig into the details, there are three main ways drummers can incorporate electronics in worship, and I’m not talking about the Roland kits from the 90’s. I’ll start by explaining each of the three and then give you a rundown of my personal setup at the end.

I’ll be brief here since we already have a few blog posts about running tracks. Using a click, tracks, and in-ear monitors can tighten up your band to increase the level of excellence and professionalism of your worship team. At Austin Stone Worship, we typically have drummers run tracks. Since drumming inherently brings form and dynamic to a song, it feels natural to have the drummer orchestrate transitions between the end and beginning of songs.

There are two main programs we use to run tracks live: Ableton Live and Playback. Ableton is a powerful music processing app that can basically do anything you throw at it. If you’re new to this program, we have a blog on Running Click and Tracks with Ableton Live.

Personally, I use Playback to run tracks. It’s a mobile app made by MultiTracks.com that works on your iPhone or iPad. I prefer Playback because it was designed specifically for worship leaders, so it’s intuitive and doesn’t take an engineering degree to figure it out. Playback has a lot of useful features that allow me to program automatic song transitions, crossfade live into another song, or move to different song sections on the fly. As a drummer who occasionally plays with other worship leaders, I know that having an up-to-date tracks rig can elevate and modernize your sound.

One-shot samples are not only really effective for creating textures and layers in drum grooves, but you can also use them for alternate snare or kick sounds to lay down a groove. When playing with Jarryd Foreman, the band loves incorporating these sounds into verses or breakdowns to bring a fresh sound and keep up the energy. A verbed-out tambourine, sub drop, and 808 kick are the ones I use the most. If you’re looking for samples, That Sound has a free pack of 500 samples to get you started. For most worship songs a catalog of 15-20 sounds should fit your needs. If your worship team records your own songs, ask your engineer to export all the individual drum sounds so that you can create song-specific kits.

To give you an example of how I would use these, listen to verse two of Austin Stone Worship’s song “In The Hands of Christ My King.” You could surely play the song without the drum samples, but incorporating them fills space that otherwise would be left empty.

Once you have some samples to use, you’ll need a drum pad. There are lots of options on the market. Here are four at different price points and a brief review of each one:

Once you have a drum pad, there are 2 ways to play the sounds live. Both have their advantages and disadvantages. You can choose either to store the samples on the internal storage of your drum pad or to use your drum pad as a MIDI controller and run drum samples through Ableton Live.

1. Storing Samples in the Drum Pad

Personally, I use the Roland SPD-SX with sounds stored on the internal memory. Since I often rely on my SPD-SX for samples and for triggering my kick and snare (which we’ll get into in the next section), I like having the peace of mind that all my sampled drum sounds are coming from a dedicated hardware unit instead of a laptop running Ableton. Since I use Playback to run tracks, I like to know that if something were to happen to my tracks rig, my sampled drum sounds keep running.

An alternative method is to use Ableton Live to store your samples. It’s a great option if you already use Ableton for tracks and are on a budget for a drum pad. When you run samples through Ableton, you are essentially using your drum pad as a MIDI controller, which means that any drum pad will do the job. This option also allows you to easily change kits/sounds mid-song or switch between kits immediately when you launch a new scene in Ableton by sending MIDI notes to your drum pad. Philip Ellis, drummer for Aaron Ivey, has created a great video about how he uses drum tracks in Ableton for his electronic sounds.

Whether you store your sounds on your drum pad or create drum racks in Ableton, my advice is to find a solution that works for you and gives you the most confidence when you perform.

In addition to using one-shot samples from my SPD-SX, I also have the ability to run a kick and snare trigger on my acoustic drums, along with an external bar and kick triggers to expand my SPD-SX. Triggering the kick and snare allows me to send FOH a clean kick and snare sample that they can use for mixing the mains or in-ears. If you’ve never used a kick trigger sample instead of a kick microphone in your in-ear mix, you’ve been missing out. My stock sounds are a natural/dry kick sample and a slightly verbed deep snare sound. If I’m playing Hillsong Young & Free or something more upbeat, then I’ll use an electronic kick and a distorted snare sound. You can also use triggers on the toms so that FOH can use them to open and close the gates.

Roland has great triggers for the price. They have amazing dynamic range and sensitivity and they connect seamlessly with my SPD-SX. I use the Dual Trigger on the snare, the Kick Trigger on my kick, and the Single Triggers on the toms.

What do I use?

Let’s be honest, sometimes you just want to copy and paste. Now that I’ve given you a lot of options for how you can incorporate tracks, samples, and triggers into your drum setup, I’ll show you what I use week-to-week. It’s important to note that I don’t use everything all the time. For instance, in the picture above I wasn’t using the BT-1 Bar Trigger or any of the acoustic drum triggers. If I’m setting up a house kit for a large church auditorium or I’m at a week-long camp with a great FOH console, then I feel comfortable sending more lines and giving the engineer more control. Here’s a list of everything I would use for a full setup:

I’m a huge fan of keeping things simple and because I travel so often with my kit, I like to bring the least amount of equipment with the most functionality. My motto tends to be, “Everything you need and nothing you don’t.” I only use one cymbal stand to mount my SPD-SX, MIDI controller, and iPad. I call this my “mission control center” for anything relating to tracks, samples, or triggers.

I attach my iPad to the bottom of the stand and run a USB cable to the audio interface, a USB cable to the MIDI controller, and a lightning cable to keep the iPad charged. Playback instantly recognizes my interface, the iConnectivity PlayAudio 12, and remembers my bus routing from the last time I used it. Out of the interface, I run a balanced TRS to XLR snake so you can plug right into your stage snake and not have to use a bunch of DIs.

Because Playback is running on my iPad, I don’t like to touch a screen while I play or transition between songs, so I use an Arturia MiniLab MIDI controller. I assign functions for starting and stopping tracks, navigating song sections, looping song sections, turning off and on the click, turning off and on the guide, and whatever else I need to control. I mount the MIDI controller above the iPad on my cymbal stand.

Above everything is my SPD-SX, which has built-in samples stored on the internal memory. I have three kits labeled “WRSHP 01,” WRSHP 02,” and WRSHP 03,” as well as a few song-specific kits. I like to think of the kits as increasing in intensity from WRSHP 01 to WRSHP 02 to WRSHP 03. “WRSHP 01” is my kit for an acoustic/stripped set. It has some organic tambourines, claps, snares, and kicks. “WRSHP 02” is my go-to Sunday morning kit. It has a tight electronic kick and snare, a verbed-out electronic kick and snare, a glitchy/tight hi-hat, verbed-out tambourine, and a sub drop. Finally, “WRSHP 03” is perfect for youth events or summer camps where I need some punchy electronic sounds. It has some overdriven electronic kicks and snares, tambourines, claps, snaps, and sub drops.

Here’s a picture of my setup with labels where each trigger would go:

Here’s an up-close picture of the KD-7 Kick Trigger:

I use the RT-30HR Dual Trigger on my snare, BT-1 Bar Trigger mounted on top of my kick, RT-30K Kick Trigger on the rim of my kick, the KD-7 Trigger right next to my kick, and the RT-30H Single Triggers on my toms. The cables from the tom triggers go straight to FOH for them to control gates. The kick triggers, snare trigger, and bar trigger all run into the back of my SPD-SX into the “Trig In” ports. The SPD-SX has two stereo inputs for triggers, but I treat every trigger as a mono input so that I can use all four triggers simultaneously. I run a short Hosa 1/4” Splitter out of both “Trig In” ports, so I have four female 1/4” inputs. Input 1 is the RT-30K Kick Trigger, Input 2 is the KD-7 Kick Trigger, Input 3 is the RT-30HR Snare Trigger, and Input 4 is the BT-1 Bar Trigger. Then, when I go into the SPD-SX Wave Manager software on my computer, I can drag and drop files into each “EXT Trig” patch. At this point each trigger is linked to the respective sound sample I assigned it in the software.

When you start using this many triggers, the SPD-SX really begins to prove its value. I can send the kick trigger and snare trigger out separate outputs so that FOH can blend them into the live mix separately from each other and separately from my other one-shot samples.

By combining tracks, samples, and triggers, I have a flexible setup that can be adapted to the live situation in which I’m playing. Whether it’s a stripped-back worship night or a hyped summer camp, I hope this post gives you the resources you need to achieve a 21st-century drum sound.