Stories from The Reveille: The Red Cabinet 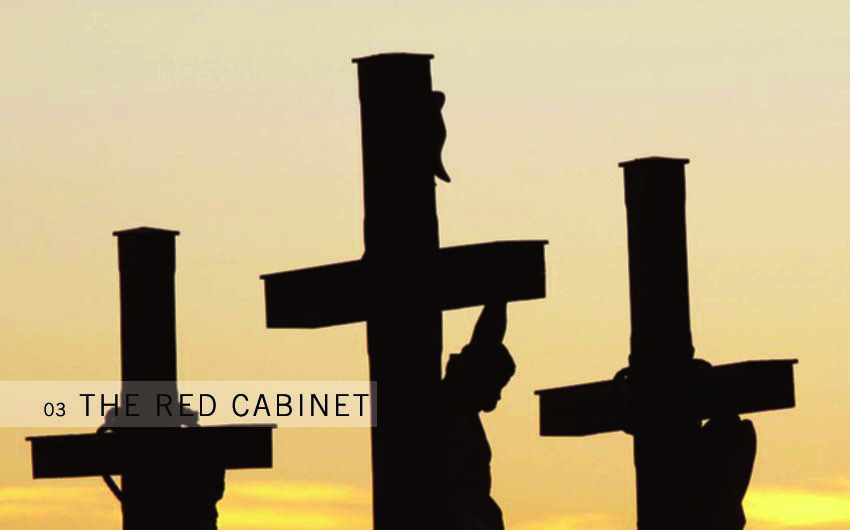 One of the things that always strikes me about Jesus is how He is never blind to those around Him. At any given moment, no matter what other circumstances He is involved in, He is ALWAYS looking for an opportunity to minister to those around Him. Imagine: even on the cross, at the point of His greatest agony, when the world (and even His own Father) have turned their back on Him, He is taking care of those around Him. If there is EVER a moment to be selfish, this should be it! But instead, Jesus makes provision for His mother at the last moments of His life.

We see this at many other points in Jesus’ ministry as well. He stops His teaching to let the children come to Him in Matthew 19. He pauses His journey to meet with the woman at the well in John 4. On His way to heal Jairus’ daughter in Mark 5, Jesus stops to heal the woman with the issue of blood.

It is interesting to realize that the vast majority of those that He goes out of his way to help are outcasts, those who would normally be shunned by society. The crippled, the prostitutes, the poor. Perhaps the largest sect that would have been second-class citizens in this culture is women. Their worth was not determined not by their own merits or as God’s image-bearers, but instead by the men who often treated them poorly or would be singled out for their sin. The woman caught “in the very act of adultery” in John 8 would of course have been with a man, but the man was let off the hook, and only the woman was “charged”. Paul tells us in Galatians 3:28 that “there is neither male nor female, for you are all one in Christ Jesus”.

“The Red Cabinet” was born from Jesus’ caring words in John 19 to his mother and to John, the disciple whom He loved. He takes the time, at that most desperate hour, to assure those around Him that He has not forgotten about them. He will provide for them, and they are not beyond His sight.

I was very moved by this image: Jesus, on the cross, looking down on His friends and family, and even in that moment caring about them more than Himself! How powerful it is to then read Philippians 2, the Suffering Servant living out what it means to “count others more significant than yourselves” (Phil. 2:3). He became obedient to the point of death, and indeed His obedience cost Him His life. For our sake.

It was a challenge for me to think on how to adequately express this sentiment. It is at the same time poignant, sad, loving, and sorrowful. Ultimately, I decided that piano was the most suited instrument to express that. The piano is an incredibly versatile instrument, being nearly as percussive as it is melodic. The piece weaves through several different keys, leaning in to the disjointed and melancholy mood that must have been present in that moment on the cross looking down. It is equally from Mary’s point of view, who I imagine would have forever replayed this moment in her head, seeing her Son perched above on His red cabinet, bloody and mistreated, seconds away from death, saying, “Woman, behold, your son!”