Stories from The Reveille: Approaching 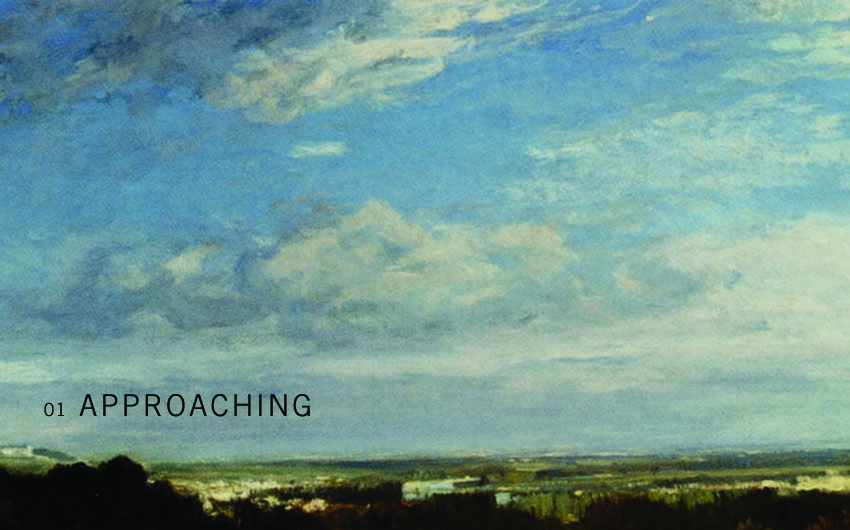 “As I looked, behold, a stormy wind came out of the north, and a great cloud, with brightness around it, and fire flashing forth continually, and in the midst of the fire, as it were gleaming metal. … Over the heads of the living creatures there was an expanse, shining like awe-inspiring crystal, spread out above their heads. … And above the expanse over their heads there was the likeness of a throne, in appearance like sapphire; and seated above the likeness of a throne was a likeness with a human appearance. … Like the appearance of the bow that is in the cloud on the day of rain, so was the appearance of the brightness all around. Such was the appearance of the likeness of the glory of the LORD. And when I saw it, I fell on my face, and I heard the voice of one speaking. And he said to me, ‘Son of man, stand on your feet, and I will speak with you.’”

I like to imagine Ezekiel enraptured, sitting still, as the “wheel” described in Ezekiel 1 is guided toward him by the four heavenly creatures to at last reveal the glory of God, sitting on His throne. Ezekiel’s language longs for the right words to describe the scene, the ever-approaching glory of God. His words send immediate reminders of the creation narrative in Genesis 1, particularly in describing the “expanse.” But they also hint at the returning of Christ at the last days, especially reminiscent of John’s description in Revelation of the extravagance of the throne-room of the Lord, with the four living creatures included (see especially Revelation 4). Both Ezekiel and John also describe the scene like the sound of “many waters” (Ezekiel 1:24; Revelation 14:2) and loud rumbling (Ezekiel uses the image of a coming army in Ezekiel 1:24; John uses the image of a thunderstorm in Revelation 14:2).

When God approaches, things change. First, those in His presence bow in wonder and awe. The glory of the Lord is so full, so encompassing in its arrival, that it overwhelms Ezekiel (1:28b), much like it does Isaiah, in Isaiah 6:5, and John in Revelation 1:17. To be in the total presence of the Lord would kill a man (see Exodus 33:18-23), but God knows that just a small of glimpse of His glory will be enough. So it is with Ezekiel.

Secondly, the presence of the Lord invokes action. Moses is approached by God to lead His people out of Egypt and into the Promised Land (Exodus 3). Isaiah immediately volunteers to go after God reveals Himself (Isaiah 6:8-9a). Ezekiel is told to eat the word of God and then “go” to Israel after the vision described in Chapter 1 & 2 (Ezekiel 3:4). John is told to write down his vision for the edification and admonishment of the church (Revelation 1:19). Likewise, the presence of the Lord should awe us and inspire us to action for His glory. This is why we began the record with “Approaching”. It is our “call to worship”, so to speak.

The most amazing thing about God revealing Himself to man is His willingness to speak with us. Ezekiel’s vision ends with something astounding: “Stand on your feet, and I will speak with you.” God gives us a place of honor (standing in front of Him), and says He will speak with us. Not only will He speak to us, but with us. This should amaze us! The sovereign God of the universe, infinitely holy and wise, has chosen to speak with us. And Ezekiel’s vision—along with the title “son of man”—should instantly bring us to the cross, to Jesus Himself. For in Jesus we have “God with us” in the truest sense of the form. God speaks with us through Jesus, for He is the Word of God become flesh (John 1:14).

I wanted “Approaching” to sound beautiful and fairly calm throughout, but with a certain intensity that should encourage the listener further into the sound. I had in my head the image of driving on a country road late at night, closer and closer to the city, the lights growing and becoming more distinct until at last you are completely engulfed by them, in awe that it was in actuality bigger than you could have ever imagined. The challenge was to mimic Ezekiel’s vision: overwhelming but clear. The sound begins afar, and draws closer and closer, slowly and almost imperceptibly, until it is all around you and nearly louder and more than you can bear.