Places We Don't Want to Go 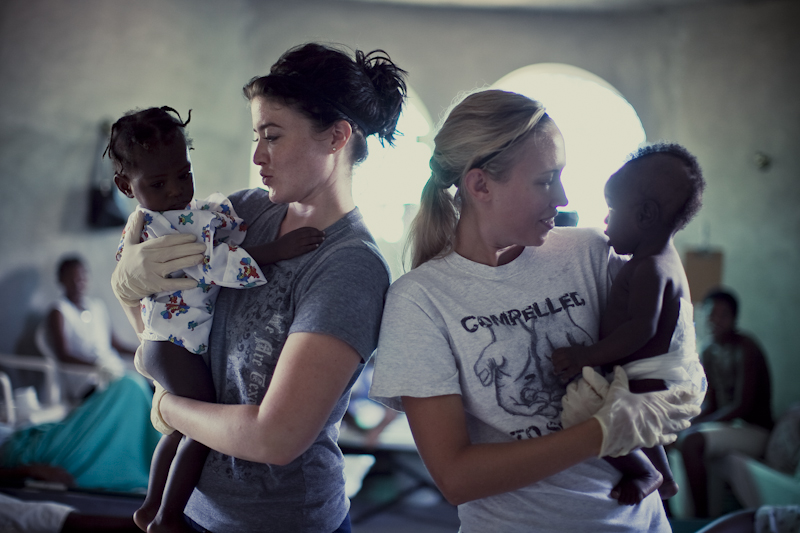 On October 1, nine strangers boarded a plane headed for Haiti. Unbeknownst to the others, each member of the group had, at some point, considered not showing up. Each member of the team had doubted his purpose, questioned her strength and planned for the worst-case scenario.

"We were group of people coming into a place unknown, and not knowing each other," recalls group leader Jim Young. "Really, each of us was going out on a limb to even go."

But it was that abandonment and anonymity that was integral to the group's development. "It was so cool that nobody knew each other," Jim recalls. "We were all out of our comfort zones. We were going to a place we had never been, without knowing what in the world was going to happen. I think that's a good recipe for God to move: a bunch of unknowns and just trusting him."

In Haiti, the group worked with Heartline Ministry, spending their days teaching new mothers, doing repair work, and even venturing to Real Hope for Haiti's Cholera House. They saw brokenness, fear and poverty beyond anything they had ever imagined.

But in the midst of it all they saw hope.

They saw how essential God is to the everyday lives of Haitians – and how we differ from them so much in this way. "We don't completely rely on him for everything because we don't necessarily need to in our minds, our jobs and our lives," says Jim. "They do. There's nothing else there. People who know Christ know the power that he has."

They spent their nights together on the rooftop of their guesthouse praying and worshipping together. On this rooftop, they saw God work a miracle and transform nine strangers into family.

"As the nights went by we saw people start to struggle and reveal their hearts and, in some instances, confess sin to people they didn't really even know," says Jim.

These people walked away from the trip changed. Men and women who had never given missions a second thought are now applying to move to Haiti, Japan and East Asia for long-term ministry. Jim attributes it to the transformation of the group.

"Everybody was just questioning where God was leading and questioning all these things. We started seeing that God can do some amazing things. God is huge. God is here in this place. God is in places we don't want to go. He is involved in all these decisions we are questioning."

Jim also felt the transformation on a personal level. "This really un-numbed me. As I sang and just tried to be one-on-one with the Lord, I began to feel the weight of worship a little more."

Coming back home from Haiti posed its own unique set of struggles. Jim wrestled with how to approach life back in the U.S. after such a transforming experience.

The tension of life and ministry weigh heavy on his heart "It's easy to get back on the Ferris wheel and lose sight of a greater call," he says. "I'm trying to be aware of that and what God's trying to say."

"If you give him room to work, he will. Give him space. Believe."