Partnership in the Gospel 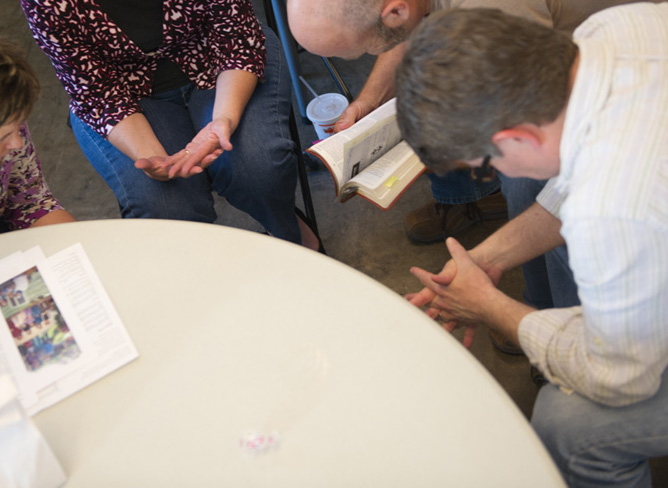 When Gig and Janet Janicek opened their missional community group to three goers from the 100 People Network, they didn't know what to expect. They anticipated that Ruth, Lucy, and Angela would share their stories, ask for prayer and financial support, and continue on in their support raising journey. But, in his mercy, God had something different in store. Something much bigger than anyone in the group had ever imagined.

The girls came to the missional community and began to share. As a part of a casual conversation, the girls began to share their visions, confirmations and internal struggles. The Holy Spirit was present and hearts were being changed.

They presented themselves as ordinary girls; not supernatural but just obedient. The group was in awe of their faithfulness.

As this missional community group of "seasoned" believers, as some would call them, listened to the girls, Gig realized that these young women weren't sharing with a bunch of peers. They were actually sharing with people who were old enough to be their parents.

And the community group noticed that, too. Before the girls left that night, hearts had been changed, checks had been written, and plane tickets had been purchased. The Holy Spirit moved and the life of this missional community group would never be the same.

A few days later, Gig presented to the group the idea of forming advocacy teams for the girls and the response was overwhelming. Although no one really knew details of what to expect, Don and Shelley Williamson immediately knew that God had prepared them for a mission such as this. He had led them to many of the 100 People Network meetings, to this specific missional community group, and to these girls.

There was no better time to serve, and they were ready.

With Lucy's advocacy team already having been established, the group quickly formed teams for Ruth and Angela. Now each of the girls had an advocacy team leader, physical needs coordinator, communications director, re-entry coordinator and prayer leaders.

The Janiceks and Williamsons were honored to be a part of Ruth's team. As believers, they were continually floored by Ruth's boldness in her mission. Her faith was unwavering, her obedience was strong, and her willingness to leave was a genuine calling. Each member of her advocacy team quickly grew to love Ruth as one of their own.

Within two weeks of their first official meeting, Ruth's team found themselves gathering at the airport to send her off. What had started as random goers from the 100 People Network visiting a community group had quickly turned into a deeply-rooted partnership in the gospel. But Ruth wasn't the only one who benefitted from this.

Acting as her vital support system propelled each member of her team to really dig deeply in the Word, to truly commit to her prayer needs, and to become her sound, wise counsel. They began to pray, Lord, give us your wisdom and the Lord abundantly answered their prayers.

When Ruth encountered financial difficulty while on the mission field, her advocacy team went to work and served as her hands, feet, and voice, setting out to meet each of her needs. This included sharing with other missional community groups and traveling to Ruth's hometown to speak at her home church.

The members of her advocacy team realize that it is not the eloquence of their words that convinces people to partner with Ruth, but that God works in spite of them. As they see continual answers to their prayers, they are reminded that God is leading their team here and abroad.

"Beloved, it is a faithful thing you do in all your efforts for these brothers, strangers as they are, who testified to your love before the church. You will do well to send them on their journey in a manner worthy of God. For they have gone out for the sake of the name, accepting nothing from the Gentiles. Therefore we ought to support people like these, that we may be fellow workers for the truth." (3 John 1: 5-8)

"This is the most fun I've ever had!" Gig exclaimed. "We get to experience the same joy Ruth gets from serving overseas because we are now being faithful. We're so thankful that God showed us what a sender is!"

Ruth is no longer someone that they just support. She is part of their family, and she always will be.