Obedience to the Fullest 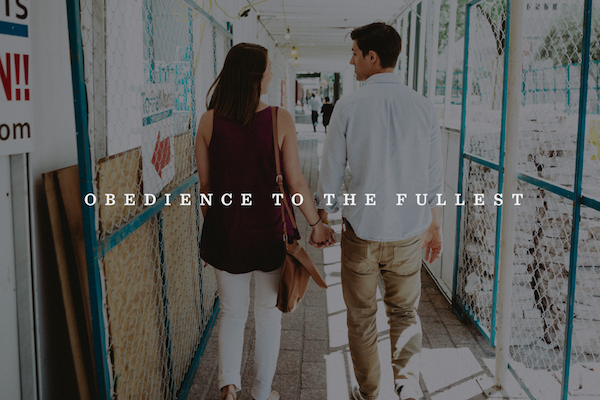 Years ago, Sean and Melissa Lyons used to wriggle their toes in Malibu sand and eat breakfast burritos on the beach as a favorite date pastime. Born and raised in golden California, they were theater kindred spirits who fell in love. Sean studied acting and Melissa pursued stage management.

They got married and spirited away to New York City, combing the streets for acting prospects. The couple thrived in an old exposed brick, 440-square foot apartment, with Melissa working full-time and Sean gradually becoming more involved in ministry. With a love of creating something from nothing, the couple still had aspirations to start a theater company—but God changed this dream into a desire to start a church.

“I wanted to use the power of the gospel to lead out in some way,” remembers Sean, “but I didn’t know what steps to take next.”

However, Sean felt conflicted about leaving acting for full-time ministry. One day, he met up for coffee with his friend, Todd Engstrom, and shared about his uncertainty.

“I told Todd, ‘I don’t know if I can let go of these ten years of blood, sweat, and tears,’” Sean says. “He replied, ‘But isn’t that the economy of God? The One who gave up His most prized possession, and is asking us to do the same for the sake of His kingdom?’”

The Lyons felt urged by the Lord to move to Austin. They built a temporary life in a Far West apartment, and both flourished at The Stone as they grew in theology and doctrine.

“It was like you first see a picture, but it’s more of an outline or stencil. And now, color and details have come in,” Sean says. “I developed personal convictions about the core of a church. We want to see neighborhoods and families reached, and churches planted."

Joining a Phase 2 Goer Missional Community compelled the Lyons, however, to reconsider their path. Their experience revolutionized their outlook on missions, and they felt encouraged to go to the nations themselves

“Doing a Phase 2 was like going into a cold ocean,” Melissa says. “At first I was like, This sounds way too intense. But once I got in the water, I started swimming, and I wanted to keep swimming. I didn’t want to leave.”

“We needed to think about whether we should go the nations,” Sean says. “We thought, Let’s just be willing to go to, say, East Asia. We’d never been challenged like that before—missions was what other people did.”

In the midst of this tension, the Lord impressed upon them that they could still shepherd people in the States in an environment embedded with “mobilization DNA”—as Sean describes it—where they could work with other communities to cast a global vision for reaching the nations. Fully convicted about church planting, two cities rose to their minds: New York City, a cerebral yet beloved place, and Los Angeles, a representation of home and glamorous worldliness.

Sean and Melissa looked to the steadfast comfort of Scripture to guide them, and Isaiah 40:8 stood out like a blazing anthem: “The grass withers, the flower fades, but the word of our God will stand forever” (ESV). The Lord set their hearts on fire for Los Angeles.

“I realized how many people in LA are spending so much time and energy for that which will wither and fade,” Sean shares. “Peter quotes Isaiah 40 in 1 Peter: ‘And this Word was the good news that was preached to you.’ People are giving themselves to a vapor.” Emphasizing the word “vapor,” his tone is laced with sadness. “They desperately need the Word of God.”

Melissa describes her thoughts on choosing LA, quoting Hebrews 13:14, “‘For here we have no lasting city, but we seek the city that is to come.’ I want the people of LA to not harden their hearts—that the Spirit would move. Of course, you can say that about any city. But I don’t cry about any city.” She inhales deeply to steady her shaking voice, her eyes shimmering with tears. “For some reason, my head and my heart keep pointing west.”

So how can they do it? What has driven them to walk this fine line and navigate murky fogs of uncertainty to discover the Lord’s heading?

“There’s a desire for approval and fear of man that exists in me,” Sean confesses. “Obedience to the Lord is daily denying yourself, picking up your cross, and following Jesus wherever He asks you to go. To deny myself is to deny my reputation and deny the approval I seek.”

“Obedience is taking Him at His word,” Melissa says. “God, You can’t lie, because You are full of truth. You have laid out for us the way we are to live. So I’m going to take You at Your word and trust that that’s right, and try to live that way, even though I will fail.”

Sean and Melissa began carrying their cross among skyscrapers and a tiny brick apartment, fueled by a simple conviction to lead people to faith. Now they continue to carry that cross as they swiftly answer the Lord’s call to go west and establish their own church. They trust Him to continue doing a good work in them until completion.