Not Without a Purpose 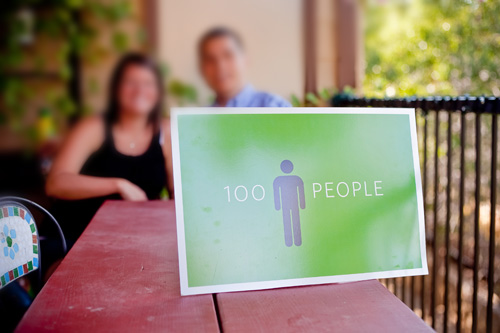 It was their hearts for the nations that first brought Scott and Shelly together at the University of Mary Hardin-Baylor.

"It's kind of neat when you meet somebody and they have that same unique interest as you do," Shelly recounted. "It's not every day when you can talk to somebody about your love for Africa."

They planned to adjust to married life here in the States for a year before embarking on the mission field, but God had other plans. "We were never on the same page about going," Scott explained. "We prayed for God to [give us direction], and about a week later, The Austin Stone announced the launch of the 100 People Network."

Though both Scott and Shelly had a heart for Africa, they had never thought about the possibility of serving in the Muslim cultures of North Africa. However, after learning more about the unreached people groups in the region, they began to pray seriously about serving there. Not long after they started praying, a friend asked them to consider taking a vision trip to a country in that area. "I didn't even know where it was! I had to look it up!" Shelly confessed. "We didn't have a clue about the lack of Christ's presence in the Muslim world. God very much showed us while we were there that what we had always assumed about our lives wasn't necessarily his plan."

After that trip, the two knew the place they would be serving. They quickly connected with a team of families that were interested in going to the same region and started learning everything they could about the culture. Despite the peace that they've experienced about their move across the world, the two admitted they will have to make some difficult adjustments.

"In Muslim culture, it is unheard of for the man to be seen cooking, and I love to cook," Scott acknowledged. "Maybe I'll try to take up fishing instead!"

Along with Scott's cooking, the couple said they would miss simple things such as Austin restaurants, air conditioning, and the constant love and support they receive from friends and family.

"The support we've had from our friends and community here is amazing. I can't imagine taking a huge step like this without that [support]," Shelly said.

The couple believes the support they've received is evidence of the entire body of Christ at work. "You don't have to be a goer to be a part of the 100 People Network. There are 100 people going, but there are hundreds more people supporting [them]. The goers aren't any more important than the senders or mobilizers. You have to have every part working in cohesion."

With the support of their loved ones and with a baby on the way, the couple is confident that the Lord has big things in store for their family and for North Africa. "He doesn't have us going there for no purpose," Shelly said. "We have to believe that what we're doing is making an eternal investment."

"I'm excited to see God fulfill his promises in my own life and on a global scale," Scott added. "To uproot my family and move to the desert—there's no hope in that unless you believe God's promise to bring all nations to himself. If I didn't believe that, there would be no hope in going."