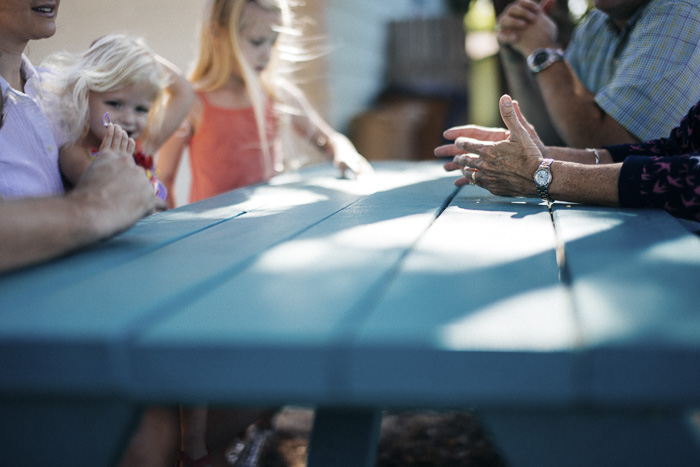 In the middle of Austin lies a neighborhood with quiet, tree-lined streets and driveways adorned with children’s chalk art. It seems perfectly ordinary, but something extraordinary is going on here. People walking their dogs and pushing strollers can’t miss the two picnic tables, both painted bright turquoise, sitting in lawns a few blocks apart. They represent two families who are trusting God to help them make waves and reach their neighbors with the gospel.

A couple of years ago, John and Laura Rugh were in a sweet spot with their Missional Community group. The couples had achieved a deep level of intimacy, and the wives in the group were best friends who looked forward to watching their children grow up together. John and Laura were conflicted when they felt the Holy Spirit calling them to leave their MC, reach out to their neighbors, and start a new group in their neighborhood. They began praying for God’s confirmation as they struggled with the decision.

That confirmation came during a summer deacon training at The Austin Stone Community Church. John was seated next to David Harakal, who had also been praying with his wife Suzanne to reach their neighbors and connect with their community. As the two men talked, they realized they lived just blocks apart in the same Central Austin neighborhood. With their shared mission, a new missional community group was born. For weeks the two couples met to have a meal together and pray, and they watched how God began to work.

One of their first efforts was to put a turquoise picnic table in each of their front yards, inspired by a movement started by Christian blogger, Kristin Schell, to encourage community. The tables serve as anchors that draw neighbors beyond a quick “hello” and into conversation. “I started making it a point to be out in the front yard,” says John. His daughter greets neighbors with a cheerful, “Hi, what’s your name?” A conversation begins, and a connection is made.

For Suzanne, walking her dog has become an opportunity for long talks as well as a catalyst to meet new people. David helps neighbors with their lawns and strikes up conversations around their lending library. The small case of books sits in their front yard, and neighbors are welcome to take a book anytime. Strangers, who are now becoming friends, donate books, and often stop to talk about a particular story.

The turquoise tables, dog walking, and the lending library are like pebbles tossed into water. They create a ripple effect that gives the couples the opportunity to push deeper into relationship. Laura holds a women’s Bible study in her home once a week, and Suzanne walks with neighbors to and from the study, ladies she didn’t know just months ago. John and David have a guys' night once a month at Waterloo Ice House, a neutral place they can walk to from their homes.

Moving beyond casual conversation to sharing about Jesus can be difficult, and has led to feelings of rejection. John found himself alone at Waterloo for one of their guys' nights. Laura emailed neighbors to invite them to Bible study and sometimes received a curt “no thanks” in response, or no reply at all. When the Harakals organized a party on their driveway for a neighborhood get-­together, hardly anyone came. That’s when accountability and their MC became vital to pushing forward. “It’s not about us,” says Laura. “I still pray for them because they’re rejecting the gospel, not me. God is doing a great work, and I’m not giving up on them just because they said ‘no’ the first time.”

“A year ago, the only pin on our map was the Rughs,” says John, as he points to a map of the geographic area they want to reach. The boundaries are marked, and the map is covered with pins representing people they’ve connected with and are praying for. As the Rughs and the Harakals continue to intentionally pursue their neighbors, they know that God is the only one who can bring people to Himself. They trust that He is at work, His grace rippling from turquoise tables and a lending library, into homes and into hearts.