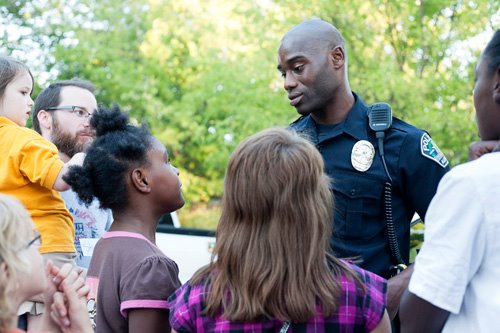 On a warm October evening, communities of people all over America came together for a singular, unifying purpose: to take a stand against crime that was once rampant on their streets. A number of Austin families celebrated National Night Out by collaboratively hosting block parties around the St. John neighborhood. Some passed out fliers while others coordinated food and drinks. According to St. John resident Kimberly Stewart, this event is necessary in order to create awareness that the neighborhood is much more than just crime and drugs. Although she remembers the drug epidemic that once plagued her street, she acknowledges the tremendous change that has occurred.

Officers from the local police department joined the event in order to increase awareness and generate support for local anti-crime organizations. Much of this event has served as a testimony to how God is at work in this community. As Kimberly recalls, it wasn't long ago that the neighborhood was an area that attracted negative attention from the police. Now it is a place of participation and activism.

National Night Out maintains a unifying purpose, closely aligning with For The City's desire for God to bring redemption and change to the city of Austin. In fact, these neighborhoods represent God's command in Isaiah for his people to be "restorers of the streets." Recognizing the tremendous weight of this charge, people like Kimberly have invested in the St. John community for the long haul and are expectantly waiting to see the ways in which God continues to work in the lives of their neighbors.

for the city
restoration
st john