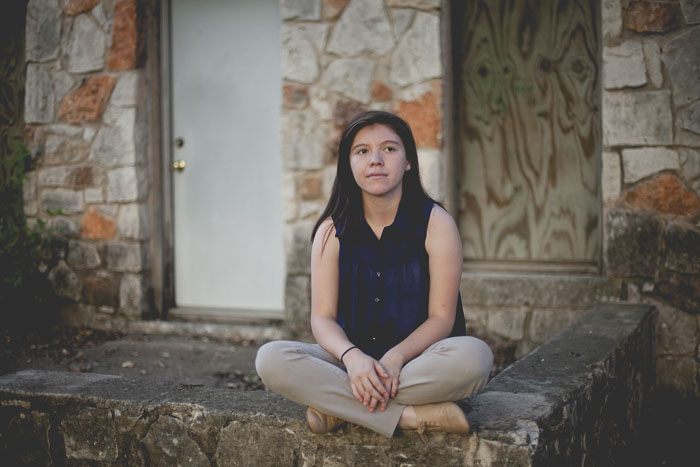 Emily put the tip of her pen to her arm and made a mark. She traced and retraced the mark, over and over for hours, until it was red and raw. She was agitated. She’d upset another friend, and this was the way she was dealing with it. “People didn’t understand why I would blow things so out of proportion,” she says. She didn’t even understand it herself.

Emily avoided the label of “mental illness” for many years. She went through elementary school depressed and bullied. By middle school, suicidal thoughts crept into her mind. She believed she could get better if she tried hard enough, but she couldn’t do it. She overreacted to little incidents, sometimes hyperventilating, and said mean things without knowing why. Her life spiraled into periods of manic behavior, and her cold heart refused to let anyone get close. Her reality became confused, and she was increasingly unsure of what was real and what was not.

By high school, a group of college students began to minister at Emily’s campus, and at camp her junior year, she accepted Christ as her Savior. For the first time, Emily experienced a thirst for the Bible and a craving to know more about Jesus, but her mental illness caused her to continue hurting the people she loved, including the camp leaders who led her to Christ. When they wouldn’t let her serve at the camp where she had given her life to God, Emily felt rejected, abandoned and very alone.

Emily’s illness became even more troubling when she began to have hallucinations. One night, after a fight with her mother, she drove for hours, irrationally angry and confused.  She was desperately trying to work things out, make things better, and all she knew to do was drive. At one point she glanced in the backseat and thought she saw demons. This frightening hallucination was enough to make Emily realize she needed help.

She found a psychiatrist she trusted and received the diagnosis she’d been avoiding her whole life. Her struggle with feeling ashamed that she couldn’t deal with her problems on her own, without medication, was finally ending. “I’d been told I was possessed by demons, or that I should just get over it,” Emily says. Now that she was receiving the professional help she needed, Emily began to accept the reality that she had a mental illness, she needed medication, and this was somehow all part of God’s sovereign plan for her life. God began to graciously reveal that he had been with her in her struggles, her doubt and her fear, and he was with her still.

She felt God prompting her to call one of her old high school leaders, and when Emily explained her diagnosis, she discovered this leader works with mentally ill patients struggling with the very same issues. Emily began to realize how God would bless her through community, though sometimes she still worries she’ll be a burden if she shares her struggles with friends.

“You calling a friend is making the church be a church,” her pastor told her, and Emily is finding this to be true. She’s discovering not only support but an opportunity to serve others as well. She recently joined the parking team at the south campus of The Austin Stone Community Church, and stepped forward to lead a Missional Community group. She also helps promote Bible studies on her college campus, asking strangers if they love Jesus and handing out fliers. She is unashamed of the gospel that saved her, and she’s unashamed to tell her story. Emily hopes she can show others the love of Christ and glorify him by sharing how he helps her in her struggles. “Mental illness is nothing to be ashamed of. It’s an illness, and at the end of the day, I’ll get to go to heaven where I will be completely healed—mentally, physically, and spiritually,” she says.

“I love that story of the blind man in the Bible. When his parents asked Jesus why he was blind, Jesus said, ‘This happened so the power of God could be seen in him.’” (John 9:3) Emily’s prayer is that the same would be true of her life—that the power of God would be evident as she lives a rich, full life, even though she’ll always deal with mental illness. The occasional outbursts are still inevitable, even while on medication. There is no cure for her illness, only treatment. But Emily has now experienced the power and love of Christ and his people, who accept her as their sister. The girl who once marked her arms until they were red and raw, is now marked by Christ.