Light in a Dark Place 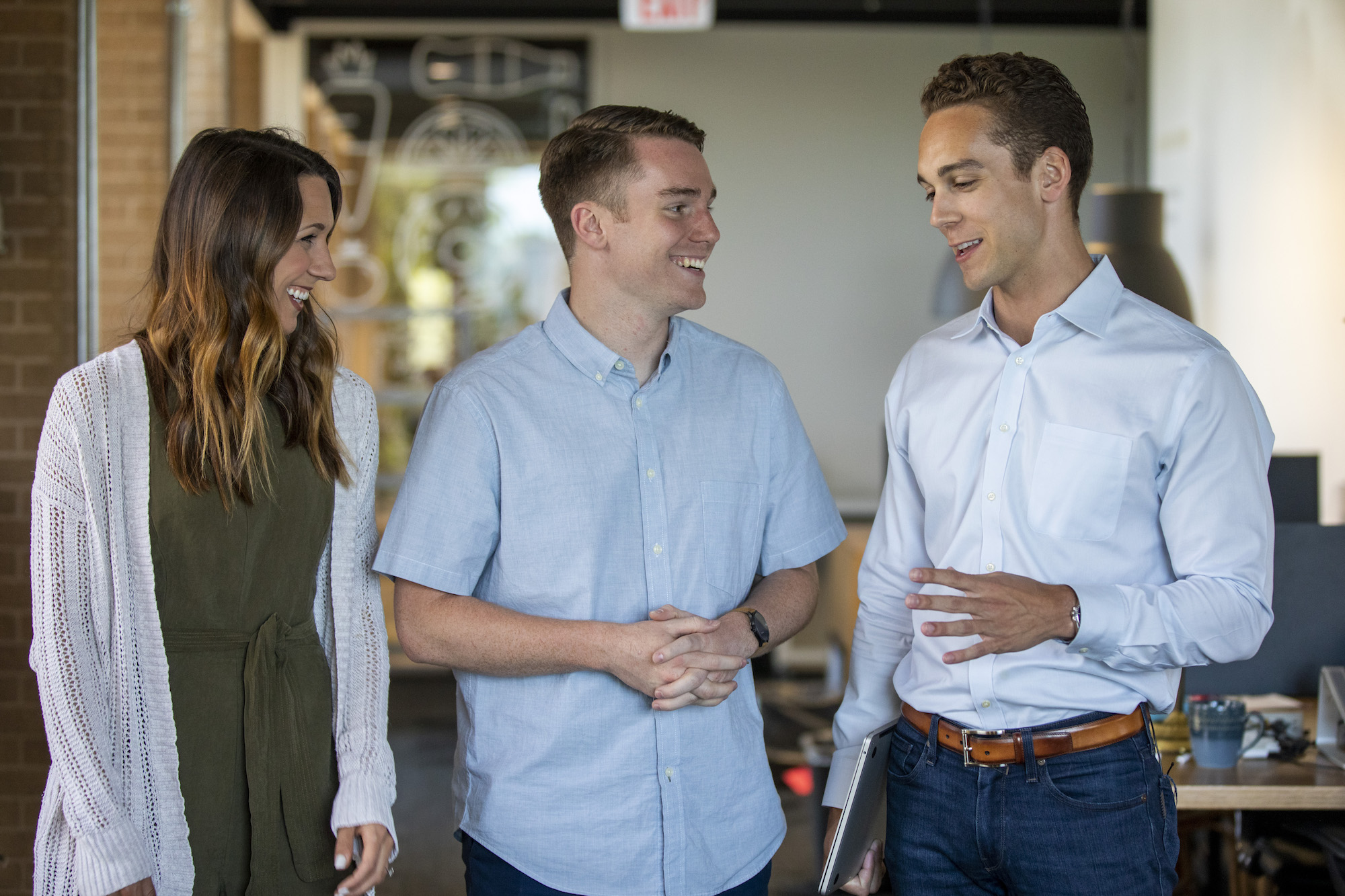 Matt Mitchell looked around his office building’s courtyard. It was filled with over 150 people eating free pizza. “Somebody’s gotta say something,” he said to his friends. So he jumped up on the rock ledge surrounding a flower bed. “Hey, everybody. We’re glad you’re here. Hope the pizza is great.”

“Jesus is one of three things: He's either a liar, He's a lunatic, or He is the Lord. No matter which one of those you believe, come hang out with us at lunch and talk about it."

Matt retells the story with a sparkle in his eye, while his colleagues Kalen Sumnicht and Kory Krumrey laugh. Their relaxed and easy manner while sharing memories over coffee reveals their rapport and offers a glimpse at how well these three work together.

“Every single person I knew at our office was there,” recalls Kory with a huge smile. “There were a lot of conversations after that like, ‘Kory, what was that? Who was that guy standing up there? What was he talking about?’”

Matt, Kalen, and Kory met while working for a large technology company in Austin where employee turnover is high. Most of their colleagues were just out of college and new to Austin. Each year brought hundreds of new hires, replacing hundreds who moved on. The culture of sales teams can be cutthroat and unforgiving. There were thousands of people starting fresh, navigating a difficult culture, and dealing with hard things.

Two years before that memorable day in the courtyard, Kalen was one of those new hires. Kalen was new to Austin, did not know anyone, and—suspecting Matt was a Christian—wanted to connect with other believers. She approached Matt’s desk and (in what Matt describes as an almost whisper) asked, “Matt, do you like Jesus?” The two started meeting to pray for their office in the cafeteria before work, and soon the group grew to eight people—eight believers praying for big things.

Over the course of the first year, the group continued to meet weekly and grow. They started teaching the Bible in their meetings, and each week, God brought more of their colleagues. Many heard the gospel for the first time. Believers found a place to love and serve their coworkers. One of those new people was Kory, who met Kalen and Matt through connections at The Austin Stone Community Church.

A few months after Kory became part of the group, Matt and Kalen decided that they needed a more formal structure to ensure meetings would continue if the group’s leaders left the company. At a meeting of the core group, Kory pitched an organizing vision aimed at making disciples, developing leaders, and reaching more people. They chose a president and four leadership positions: connections, prayer, administration, and teaching. Over the course of the next six months, the group adopted the new model.

“This is not a church,” Kory explains. “This a community that involves people in local churches. Early on, that was our goal.”

Matt picks up this thread with his characteristic intensity. “We know that as a leadership team, we don't have the ability to properly counsel, resource, and walk with women and men in our office. The group truly serves as a bridge between the office the local church. We just want to get you plugged in.”

Kalen now serves as a resident for the Downtown Congregation of The Austin Stone. In those early days of the Bible study, she realized how God has gifted her to serve the church. “I loved it. We did everything from hosting dinners at our house to giving out granola bars in the morning when people were coming in. Once we did cookie decorating, and we had a hundred people. And Matt shared the Jesus story with everyone.”

Matt once believed that working in the marketplace meant he was less faithful than believers in full-time ministry. “There are men and women that are varsity that go and commit themselves to the church or go overseas. And those are the people that really, really love Jesus.” But he came to see that God’s economy is different than humanity’s. “The Lord showed me there is a lifetime worth of ministry ahead of me in the workplace, and we need men and women to step up and heed the call.”

Matt, Kalen, Kory, and many of their coworkers heard and responded to the call. As the three of them sit around a table and share the stories of colleagues who met and came to love Jesus, they recall the guy who showed because he had questions for God, and the next day shared that he had ordered a Bible overnight and read all of Matthew. A month later he claimed Christ was his Savior. There was the girl who left the company for a job at another tech company and started a prayer group there. A man who had never prayed aloud in his life now leads the group’s prayer ministry. And the stories go on and on.

When asked how many people have heard the gospel through them in the last three years, they take a moment to consult, and then reply, “We've probably had over 1,000 people come in.” But that is not how they measure success. “In that Bible study,” Kory says, “it doesn't matter if one person shows up or if 100 people show up. What matters is the fact that we are being faithful and stewarding what we've been given that week.”

“It is God working through His people—for His people—that the gospel is made known,” Matt says. “For your office, you have to understand that you are there for God's purposes. He put you in your office, and what for? It is for you to be a light in a dark place. So if it's not going to be you, then who's going to do it?”