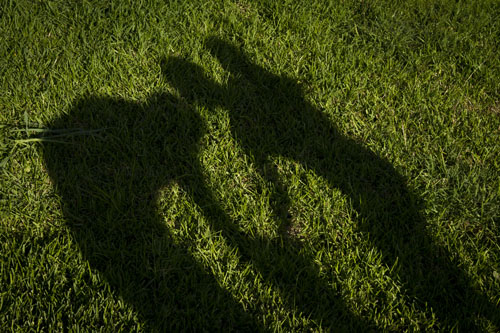 Between tiny hands reaching for glasses and small knees sliding against the tile looking for treasure, Jeff and Cara Griswold steal glances at each other and laugh.

"Welcome to our upside down life." Cara says as she reaches for her eight-month-old foster son. His brother, a giddy and curious twenty month old, chooses that moment to run up the stairs, Jeff not far behind.

They'll be the first to admit their life is crazy, but in the same breath they'll make it clear that they wouldn't have it any other way. Married almost two years, they started talking about adoption a few years before they got married.

"At that point though, it was something we'd do down the road, after we'd been married for awhile and had a few kids of our own."
Once married, Jeff and Cara moved to Austin and became involved at the Austin Stone Community Church. Jeff remembers this as a pivotal moment in their view of adoption.

"We began to understand it as not only an outworking of the gospel, but also as a picture of the gospel itself," Jeff explains. "It's a broken situation. It's messy. But Christ can redeem it - absolutely."

They actively pursue this mission through their current placement, recognizing the opportunity to love and show Christ to the mother of their foster children.

"Going into this, God really revealed a lot of ugliness in my heart concerning the biological mom and where she comes from, why these boys are with us now. Slowly, I began to realize that no, I don't want them to leave me — I love them like my own," Cara says.

"But, in a perfect world? Absolutely. I want their mom to know Christ, and I want them to be with her. This is something I battle with everyday, something I try to remember. It's why He has me as their foster mom, why He's placed us with this family."

Fresh off their first placement hearing, Jeff agrees, "It's easy to fall into the trap of seeing this as all glamorous, but it isn't. These boys — they are someone else's kids. She misses them. She wants them. And it's such a humbling realization when you understand the possibility of ministry."

From waiting to have kids to planning on just signing up for respite care certification, they say the first things they have learned are to expect God to challenge them and to rely on the community He has given them.

"We're called to be uncomfortable," Jeff says as Cara nods. "Yes, we've definitely learned to expect the unexpected... and have grown accustomed to walking around in clothes stained with spit up all day... but we couldn't have done any of this without our family and community group. They've been instrumental in us getting through day by day."

Jeff adds, "If you are even considering foster care, build your community first. Build those relationships, and work on your marriage. Learn to pray together, and learn how to set time aside with your spouse. That's been another thing we've realized: our absolute need for time with each other where we talk about stuff other than diapers."

The twenty month old grabs a piece of bread and giggles, playing with an action hero. Both Cara and Jeff look at him with small smiles.
"You know what? The biggest thing is to not be afraid to pray big prayers." Cara says, glancing at the baby in her arms and nodding her head toward his brother. "These boys are worth it. Their mom is worth it. And God is completely able."

adoption
for the orphan
foster care