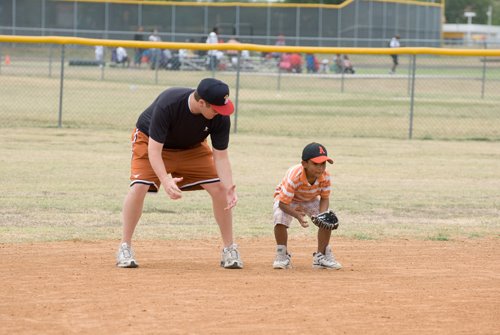 It’s Friday afternoon in St. John, and the Angels are practicing at the Reagan High School softball field. They run through the usual drills: base running, catching ground balls, and of course, the occasional water break. The Angels are a typical baseball team, except that all the players stand somewhere around four feet tall.

The T-ball team formed when John Paul Hicks decided to be intentional about sharing the gospel through his love of baseball. John Paul played baseball throughout high school and then enrolled in classes at The University of Texas. After graduating, he searched for ways to get involved in the communities of Austin. Familiar with RBI (Reviving Baseball in Inner Cities) and excited about its inaugural year in Austin, John Paul felt he could best serve God by serving the children and families of St. John on the baseball field.

Although he didn’t know much about the St. John community before coaching, John Paul said it has been a privilege to serve in the neighborhood.  “The greatest thing about this experience is getting to give back and not expect anything in return,” he explained.

He might not have expected it, but God has used the Angels to teach John Paul a few lessons as well. Specifically, he said that he has been learning how to practice patience.

Along with teaching the kids how to improve their baseball skills, he has found that he’s working through the challenges of teaching a team of kids how to get along. Differences in attitudes and personalities add stress to an already hectic environment on the field.

“There are always waterworks at our practices. But I’ve learned that whenever I get frustrated with the team or the situation, I have to pull back from my first reaction and think about what is going to help the kids the most. This team was made for the kids, and it’s really all about them and their growth.”

John Paul said that he can see the work that God is doing both on and off the field in the lives of these kids and their families. At each practice and game, the team opens and closes with a prayer.

“At first, some of the kids didn’t understand the concept of praying. Throughout the season, it’s been great to see some of the kids learn to pray, and I think they take it more seriously now.”

As their coach, he has enjoyed watching a few of the players learn about Jesus for the very first time.

“There have been some amazing things going on this season. It’s been incredible to share what’s happened not only with the St. John community but with my friends and co-workers as well,” he said.

All of the Angels players and their families had the chance to attend a recent Round Rock Express game, which was a huge hit with the group. “It was cool to see the kids connect like that. They got to experience something new with their families, and it was a good time having everyone together,” said John Paul.

The Angels are becoming more than just a T-ball team; they’re becoming a community. Not only are their parents getting involved, but a few have even volunteered to help coach next year.

John Paul plans to continue coaching the team and says he is excited to see what God has in store. Until next summer's RBI league, the Angels will be sharpening their skills at monthly RBI clinics at the Reagan HS baseball field.