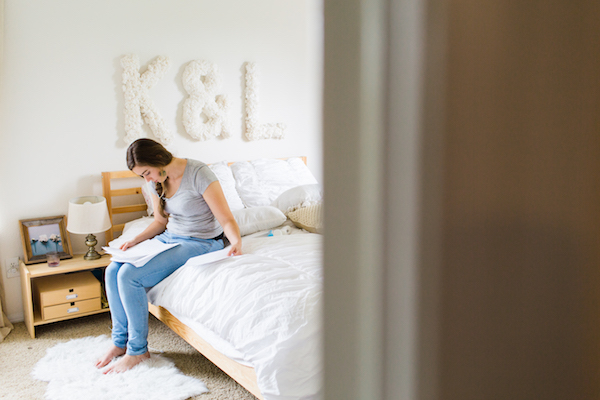 ‍God, how is this a good plan? On her worst days, this is the cry of Lauren Macher’s heart. This is her cry on the days when she’s too tired to cook. Too tired to work. Too tired to make plans with friends. Too tired to do anything but sleep. How is this what You decided? I don’t understand.‍

The unusual drowsiness started about five years ago. Lauren had trouble staying awake in her seminary classes, at times so tired she forced herself to stand in the back of the room, still barely able to keep her eyes open. At first, she passed it off as a symptom of depression, which she had battled off and on for years. As it intensified, she told herself it was due to the stress of all the changes happening in her life. She had recently married, moved from Austin to Canada with her new husband, and started a full-time ministry role.

“I thought I was just tired because I was adjusting to a new schedule,” she recalls. “I would come home tired a lot, but it wasn’t until my second year in Toronto—in the fall—that I just felt exhausted. I would come home and just instantly want to go to sleep for the night.”

But no matter how much rest she got, it never seemed to help. An insatiable need for more sleep was slowly taking over her life, replacing the things she once enjoyed like running, playing tennis, and hanging out with friends.

Exhaustion finally took its toll when the couple moved back to Austin after a change in their ministry jobs. Seemingly simple tasks, like writing emails or making phone calls, became nearly impossible. Feelings of guilt and frustration took over Lauren’s heart when her husband began to take on more responsibilities in their ministry and at home. “Every day I felt I was failing in my job, and then at home I felt I was letting Kolten down.”

Desperate, she sought help from doctors. After months of inconclusive tests and unanswered questions, Lauren was diagnosed with narcolepsy—a chronic sleep disorder that causes overwhelming drowsiness. Although she finally had a name for what had been plaguing her, the diagnosis offered little peace.

“I expected it to be a lot more comforting or more closure than it actually was. It just made me have more questions,” she says. “It’s a big deal to know this is something I’ll probably deal with my whole life.”

With time, counseling, and medication, Lauren managed to get both her depression and narcolepsy under control. But when she and her husband recently started trying to grow their family, Lauren discovered how deeply her chronic illness could impact her life. Her medication was new, and doctors warned they didn’t know how her pills would impact a future pregnancy.

“I can’t really get out of bed without them or function. How am I supposed to live life?” she remembers asking as she weighed her options.

Ultimately, the couple’s desire for children led Lauren to make the difficult decision to limit her medications, leaving her struggling with the symptoms of narcolepsy. As she wrestles daily with her body, mind, and emotions, Lauren also wrestles with her worth and identity in Christ.

For as long as she can remember, she has struggled with desires for control, comfort, and approval. The Holy Spirit worked through her battle with depression to start prying those idols away, and through the addition of another chronic health condition, her idols were “shot dead.”

Many days, Lauren doesn’t feel like a good wife, a good friend, or a good coworker, but she is learning to look to the gospel to remind herself of who God says she is in Christ.

“I can’t predict how I’m going to feel hour to hour or day to day, so it’s hard to feel like I’m going to let people down,” she says. “If every day is like my worst day, if every day I’m paralyzed by sleep, only semi-conscious even when I’m awake, does God love me and accept me, and can I bring Him glory? The gospel says ‘yes.’”

In the dark hours of hard questions, Lauren clings to the hope of eternity that a comfortable life could never produce. For now, she is clinging to that anchor as she continues to walk the unknown path of chronic illness.

“Knowing Jesus and walking with Him is worth it. Even the best life we could live on Earth is not going to compare [to eternity]. That’s what gets me through the hard times.”