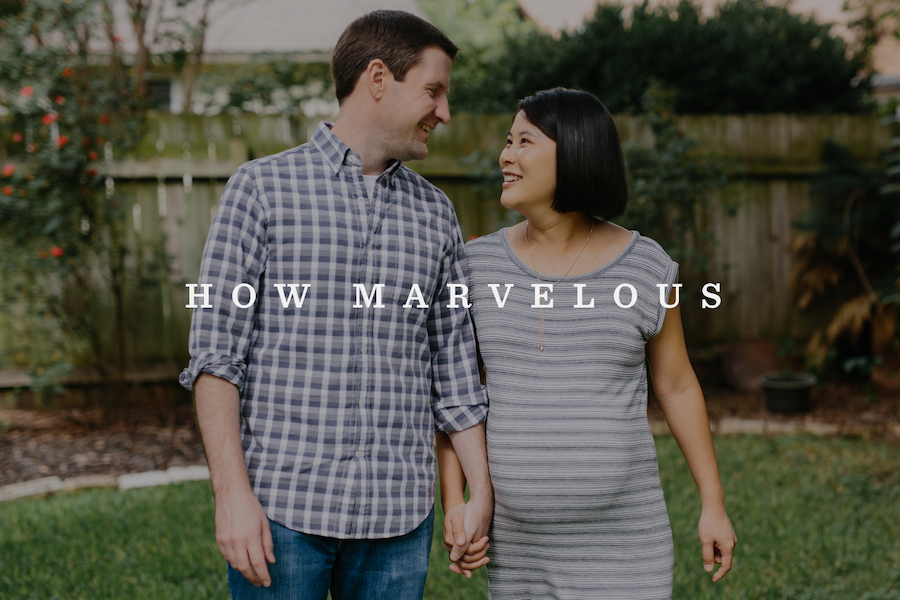 In a small village north of China’s Guangdong province, Siugi spent her childhood exploring the mountains. As she grew up, she discovered a passion for English. She excelled in it and even majored in it in college. Excitedly, she left her simple life in the village to work in Guangzhou, the big city.

Guangzhou’s industrial hustle and bustle also piqued the interest of John, a young man from Milwaukee, Wisconsin, keen for an adventure. The adventure turned lonely, and when John met Siugi, he nearly wept with relief, grateful to have found a friend.

Their friendship bloomed into a sweet romance. As their relationship became more serious, John tried to share his faith with Siugi. “I thought he just wanted to pass on his Western culture,” she says.

Even though their religious beliefs were not aligning, John and Siugi remained wrapped up in romantic bliss. After dating for a year, John flew her to Milwaukee to visit his family. While they were in Milwaukee, John thoughtfully brought Siugi to a Chinese church. She felt incredibly welcomed and loved, as the family environment of church was a far cry from visits to the temple where no one cared to get to know her. As Siugi left the service, the Chinese pastor introduced himself to her and gave her a Chinese book about Christianity. Siugi thanked him and promptly buried it in her suitcase.

Siugi and John’s relationship seemed smooth and stable to her, but John was troubled. He told her that he could only marry a believer, and ultimately, they broke up. Heartbroken and sad, Siugi realized that she had been putting her worth in the wrong thing. “For the first time, I had no one to support me,” she says. “I felt anxious about my social standing. My self-worth was so low, and I felt like I needed a man to feel wanted.”

But they could not fully let each other go. They reunited, and Siugi decided to give Christianity a chance. John gave her a Chinese-English Bible that his father had handed him before he moved to China.

Siugi thought it was a daunting text, so John also encouraged her to pray.

After some convincing, Siugi settled into bed and prayed to God for three consecutive nights. Wherever You are, God, I really want to get to know You. So if You really want me in Your life, just show me and give me a miracle to let me know You are there.‍

On the third night, Siugi had a vivid dream where she stood in her college classroom and noticed a tiny window of light. A hand reached down from the window and gave her a small note that said, “I’m God.” Startled, Siugi wondered at the dream’s meaning, but eventually she dismissed it.

The gospel still did not make much sense to her, so in desperation, she reached out online to a Chinese Christian man she had met once for help. His encouragement gave her hope: “Just hang in there. God will prepare for you to know Him deeper.” He then connected her with a Chinese Christian girl who lived in Guangzhou.

The next Sunday, Siugi met the girl for church, and her new friend’s warm welcome made Siugi feel like family. She was floored by how people at church came together as one united body and treated one another with kindness. For the first time, she felt a sense of a direction. Buoyed by this community of believers who understood her as one of their own, she attended church more regularly without John. She even rummaged through her suitcase for the book the Milwaukee pastor had given her. Slowly, Christianity started to make sense.

One Sunday at church, Siugi stood up for worship just like it was any other week. “I still remember the song. It’s the song we always sing at The Austin Stone,” Siugi says. When she starts humming “How Marvelous,” her eyes well up. “As the choir sang the hymn, my vision suddenly showed a big screen with scenes from my past—of my childhood in the mountains, my love for English, meeting John, even our breakup,” she remembers. “I saw everything that’s happened in my life as a flashback, and that’s when I really felt the Holy Spirit coming into my heart. I realized, of course God has been preparing me for this! How could I not have seen this?!”

There she stood, tears pouring down her face. In that intimate moment with the Lord, she accepted Christ as her Savior. This powerful experience imprinted on her heart, and even now, she weeps whenever she tells the story.

“Whenever I struggle or the world feels overwhelming, I’ll think back on the time the Holy Spirit came to me,” she says. “It is the reminder that God is always prepared. No matter how difficult or lost I am, He will come to me.”

For a while, Siugi felt guilty that her interest in Christianity partly existed because of her love for John. But during that worship experience, she knew that she sincerely wanted to accept Christ. She realized that salvation did not come from John; it came from Christ. He was her foundation and the One who would root her, even if her world spun into chaos. She saw that her purpose is to live for Him.

Siugi’s new faith in Christ did not immediately smooth a path forward for marriage to John. While they spent time in America so Siugi could experience more of John’s home country, he struggled to prioritize their relationship over his new job.

“I actually felt closest to God during this time,” Siugi says. “I asked Him, ‘If I don’t marry this guy, what will I do?’ And I could feel God saying, ‘You are my child, and you don’t need to rely on anyone to give you happiness. Your happiness is on Me, and I will provide.’”

So when they had to return to China, the Lord surrounded her with His peace and gave her wisdom for what to do. Siugi was ready to marry John, but John was not ready to marry Siugi. She was prepared to go back to China jobless and single, trusting in God’s leading.

With quiet peace, she let him go. “Thank you for the two years of happiness that you have brought me,” she told John, “but now I’m in God’s hands.” Even as they parted ways at the airport in China, Siugi knew with conviction that she could lean on God and His faithfulness.

Over time, John’s heart and priorities changed. He asked Siugi to marry him, and she agreed. After they were married, Siugi and John settled in Austin, Texas. Siugi loves the community at The Austin Stone Community Church and feels extremely blessed to have grown so much, especially with the freedom to worship and delve into Scripture. Now she longs to tell her people that true satisfaction and joy comes from Jesus.

Her entire life has been a journey to discover this joy. She will never forget that Sunday encounter with the Holy Spirit. “There was an overwhelming of feeling in my heart,” she says,  “that I’m loved, I’m worthy, and I have somewhere to go.

With this truth, Siugi trusts that her identity lies in Christ and that He will go before her in her future. Whether it is to stay in the States and share her story online with friends and family back in China or to actually go back to her homeland to spread the gospel, Siugi is committing herself to the Lord’s plan.