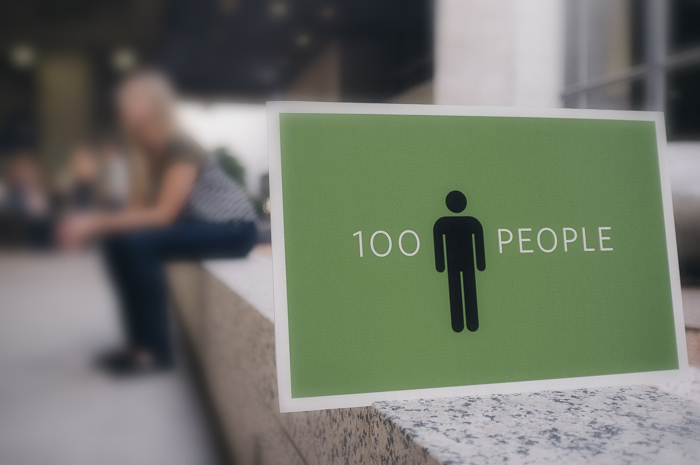 When you first walk into Janae’s house, her small dog, Evelynn, greets you. Her home is inviting and warm, richly decorated with pieces of art and volumes of literature lining the shelves. It is easy to that see Janae loves people, as you sink into the plush couch across from her, and Evelynn crawls into Janae’s lap. She will be the first to tell you that she loves making herself and others feel comfortable in their environment. “[I have] the biggest comfort idol out of anyone I know,” Janae confesses. “I have made the most comfortable life for me possible.”

Janae, a photographer by trade, helps people feel comfortable while taking their photos. She started her own business and grew it to a highly sustainable point, allowing her to establish herself in Austin. Janae is living her life in the way she had hoped, but that is all changing. Janae is becoming a Goer through the 100 People Network.

Eight months ago, God called Janae to go overseas and make disciples among unreached people groups. Through The Austin Stone Community Church’s consistent emphasis on discipleship and taking the message of the gospel to the nations, Janae understood these things are important for all believers. She answered that call by going on a trip that God used to forever alter her life’s direction.

She travelled to Europe to serve and fellowship with people who had never heard of Jesus. God used her time there to establish a deep yearning to see more people come to know Jesus on a grand scale. When she returned, Janae immediately got in touch with the 100 People Network and dove into a Goer Missional Community that focuses on learning how to be on mission together while mirroring life overseas.

Janae, with this group, is learning how followers of Jesus are called to make spiritual descendants in their lives. As a young woman yearning to be married and raising children, this concept floored her.

“I really started to understand how reaching the nations is done through multiplication,” Janae says. God is turning her desire for marriage and children into a desire to create spiritual descendants. And with this new understanding, Janae realizes that God is calling her to be a Goer for the long haul.

While God turns Janae’s heart toward his greater purposes, he also is shedding light on areas of her heart’s idolatry that she did not realize were there. Evelynn, her dog, has been her best friend for years. They do everything together, and Janae always planned on having Evelynn alongside her. But, when talking to the 100 People Network leadership about going to a prospective region, they broke the news that Evelynn was not going to be able to go overseas.

“We were in the middle of the Stone offices on the couches, and I was weeping. I told them that was a deal-breaker,” Janae says. “I left and went straight to a friend’s house and just cried for hours. I didn’t think I could do that.” Janae couldn’t fathom giving up her dearest friend and companion was a part of God’s plan for her.

But she knew that, even as much as she loved Evelynn, God’s plan was better than she could imagine. She asked God to change her heart and give her the faith to give up Evelynn when the time came for her to move. She felt God telling her, “I want you to give it all up for my purposes,” including her deep attachment to her furry friend. After months of praying, she felt a change in her heart about leaving Evelynn and came to terms with the idea. As it turns out God was merely testing Janae's will to sacrifice. Through a series of doors being opened and closed, God made a way for her to bring Evelynn on this grand adventure.

Now, Janae is just a few weeks away from leaving the States. She is living with friends after selling her house, her car, and even her professional photography gear. She fully expects to live out the rest of her life overseas. While it is terribly difficult for her to leave the Stone and the community she feels so deeply connected to, she trusts that Jesus is better.

Through the lens of spiritual heritage and making disciples, God has turned Janae’s heart from the life of comfort that she so earnestly sought to one that seeks to make disciples who make disciples in an exponential way. She is now desiring for God to bring one million people to himself through this new family he is sending her to join.