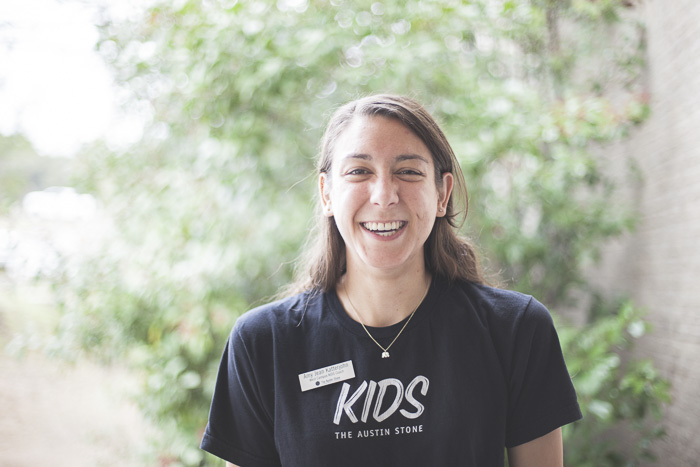 “I felt like there was no joy in serving... I didn’t want to deal with this thing that was so hard—I wanted to jump ship. I wanted to join something that looked shinier, newer, and more fun.”

Raised in Austin, Amy Jean Katterjohn grew up surrounded by a large, devoted Christian family. Her mom and dad taught Sunday school and continually brought her and her siblings along with them. By the time Amy Jean went to college at age 18, she was really comfortable with sharing Bible stories and Jesus with young children, and she loved the unity she felt in serving with others. After college, she returned to Austin, started attending The Austin Stone Community Church, and felt the desire to serve again.

Volunteering in the preschool is probably where I should go, she thought. After all, I have always worked with children. It’s what I know.‍

In 2012, at 22 years old, she began to teach a preschool group in KIDS at Austin Stone’s West Campus. She loved being back serving with a group. Amy Jean was overjoyed at the children’s eagerness to hear more about Jesus, and she marveled when they remembered the lesson from the week before. She loved telling her fellow teachers how well her preschoolers reacted to hearing God’s Word.

The volunteers around her encouraged Amy Jean to see something she hadn’t before—that she is gifted with a heart for ministering to young children and leading others to do the same. They helped her see it wasn’t only her years of serving alongside her family that prepared her, or something she does just because she has always done it, but ministering to children is a desire God placed in her heart—a desire that is uniquely hers.

“Through the encouragement of the leadership that I’ve had and some of the volunteers that I’ve worked with,” Amy Jean says, “they have opened my eyes to the way the Lord has gifted me.”

he following year, Amy Jean agreed to be a KIDS coach at the Stone’s West Campus. That meant leaving the classroom, and instead, shepherding the teachers. While excited about the new position, she felt uncertain about leading others and hesitation about leaving the relationships she had built with her small group of preschoolers. But she was soon blessed by leading a large group, as it gave her the opportunity to be consistent and intentional in building unity with all the children and teachers.

A new location for West Campus brought a shift in Amy Jean’s coaching duties. New logistical concerns, a different batch of preschoolers, and a shortage of volunteers left her unable to guide anyone effectively and with new doubts abouther leadership abilities. During this time, she visited an event at another church campus and found herself struck by the joy they had in serving together and the closeness in their tight community. She craved that same unity for her own leaders, and thoughts of what she had lost in the campus transition nearly overwhelmed her.

Maybe, she thought, leading others in ministry is not my gift. Her heart felt deeply troubled as she fought feelings of giving up.

“KIDS stopped feeling like a family,” she remembers. “I felt like there was no joy in serving... I didn’t want to deal with this thing that was so hard—I wanted to jump ship. I wanted to join something that looked shinier, newer, and more fun.”

Amy Jean wrestled with the Lord as she sought answers. She heard Him telling her, “No—leaving is not what I called you to do,” but she struggled to understand how staying on as coach could lead to the unity she yearned for. “I asked Him, ‘How does that work? If we don’t have people to serve, how can I create a team of community and family? And how can I make this happen as a leader?’ I didn’t know.”

Her answer came at Worship Collective, a monthly gathering for those who serve in worship and production, through a message Worship Pastor Aaron Ivey preached on Ephesians 4.

“I therefore, a prisoner for the Lord, urge you to walk in a manner worthy of the calling to which you have been called, with all humility and gentleness, with patience, bearing with one another in love, eager to maintain the unity of the Spirit in the bond of peace. There is one body and one Spirit—just as you were called to the one hope that belongs to your call—one Lord, one faith, one baptism, one God and Father of all, who is over all and through all and in all” (4:1-6).

Amy Jean was reminded that as a leader for KIDS, God called her to promote unity and not cause division. She was convicted to humility, gentleness, patience, and love toward her own community. The team unity she yearned needed to come from leadership—and as a leader, it needed to start with her.

She wrote personal letters to her team members sharing her desire to be one team in serving God and proclaiming the gospel to the children at West Campus. She prayed for them all, asking God to lead them to a common purpose. She leaned on Ephesians 4 as she trusted that where the Lord called her is where she can bring Him the most glory. On Sunday mornings, the KIDS coaches and teachers gather to pray in the foyer of West Campus. The community is growing rapidly in numbers and in singularity of purpose. These days, Amy Jean looks around the circle and thanks God for His faithfulness. As she continues to seek more volunteers to join her team, she knows God is working through her and others to grow her team into a community whose purpose is to glorify Him as they reach for the hearts of children.