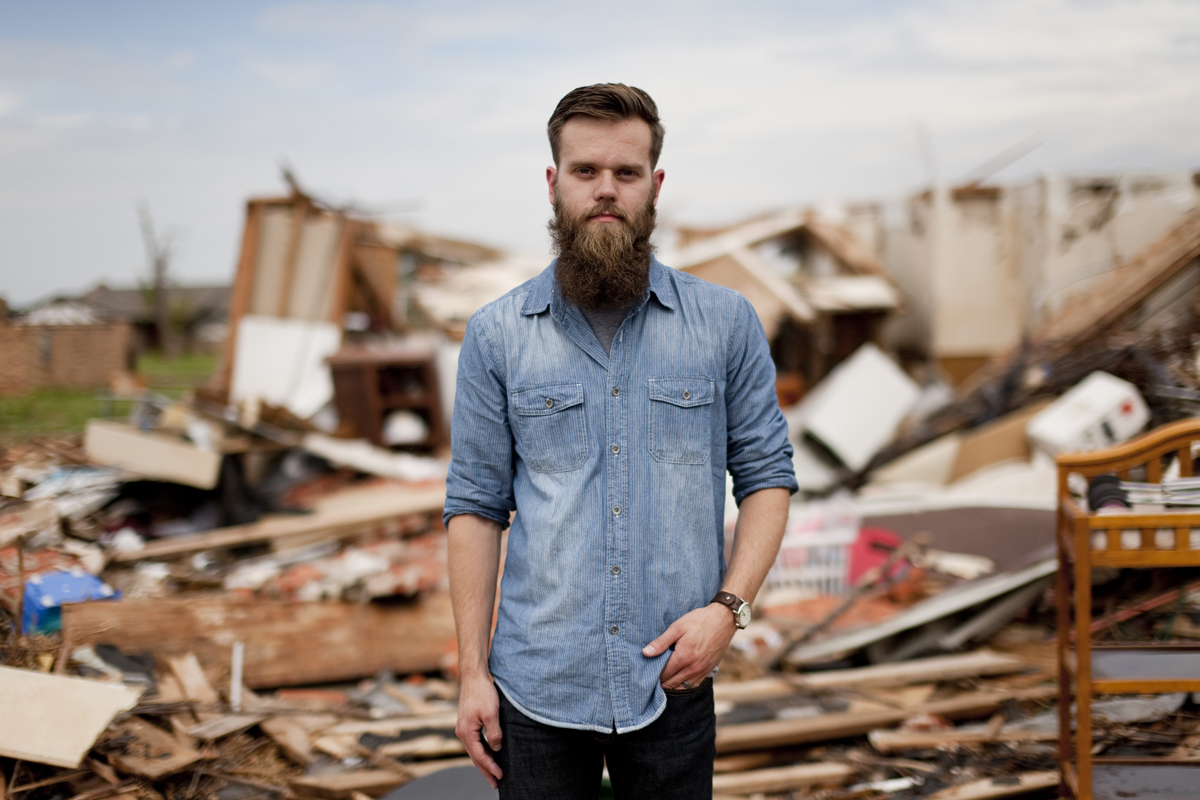 The destruction in Moore, OK is overwhelming, but so are the small moments of grace.

On May 20th, Andrew Burkhart was finishing up a meeting at a coffee shop when he realized that a severe tornado was bearing down on his town. He was immediately evacuated to a nearby home improvement store, and tried to get through to his wife on his phone. When they could communicate briefly, Andrew told Hilary where he was, and to follow the instructions from the weathermen on TV.

Hilary watched the TV and waited. Even if she wanted to leave the house, she could not. Softball-sized hail pounded their neighborhood. One hailstone could hit their small child on the way out, or go through her window while driving. Leaving now was not an option, though their home would soon be destroyed.

At the same time, only blocks away, Jamie Fallwell was rushing to her backdoor to let in her husband, Matt. It was hailing hard, and getting worse. The chunks of ice were growing larger, and the tornado was dangerously close. Matt had seen it in his rearview mirror while racing home.

Jamie opened the door and asked, “How bad is it?”

Matt came in the house and they started for the bathtub. They were not confident in their plan, but could not leave because of the storm. Then, the hail stopped.

At the same time, the weatherman on TV advised shelter for the Burkhart’s neighborhood. Hilary prepared to do so, but had a bad feeling. Then, the hail stopped.

Hilary saw the hail let up and clearly felt God tell her to run. She rushed to the car, put her child in, and tore down the road, putting as much space between her and the twister as possible.

As the hail stopped at the Fallwell home, Jamie remembered seeing a storm cellar their neighbor’s backyard over the fence one day. She asked if they should head next door.

Matt immediately took their son in his arms and ran through the backdoor, with Jamie on his heels. They ran to their neighbor’s yard, and found the gate locked. Matt wrenched it open with his free hand. They ran to where the storm shelter should be, but did not see it.

In that moment there was real panic. Jamie doubted her memory. Was the shelter really here? Matt instantly regretted coming outside. Why had he led his family outside, with no guarantees, when the tornado was drawing near?

The only thing in the yard was a shed where they thought the storm cellar should be. Matt ran to the shed and pulled open the door. There, staring back at him in the middle of the floor was a door. The neighbor had built the shed on top of the shelter. Matt banged on the door and yelled down, “Is anyone in there?!”

A voice of rescue echoed back, “Yes! Come on down here!” The shelter door closed just moments before the tornado leveled their block.

Once she drove clear of the storm, Hilary Burkhart headed to the store where her husband was sheltered. Minutes later, Hilary walked into the storm shelter, with her child safely in her arms. Andrew was shocked to see them. In that moment, he felt overwhelming relief. His heart leapt with praise for his Savior.