From Bases to Baptisms 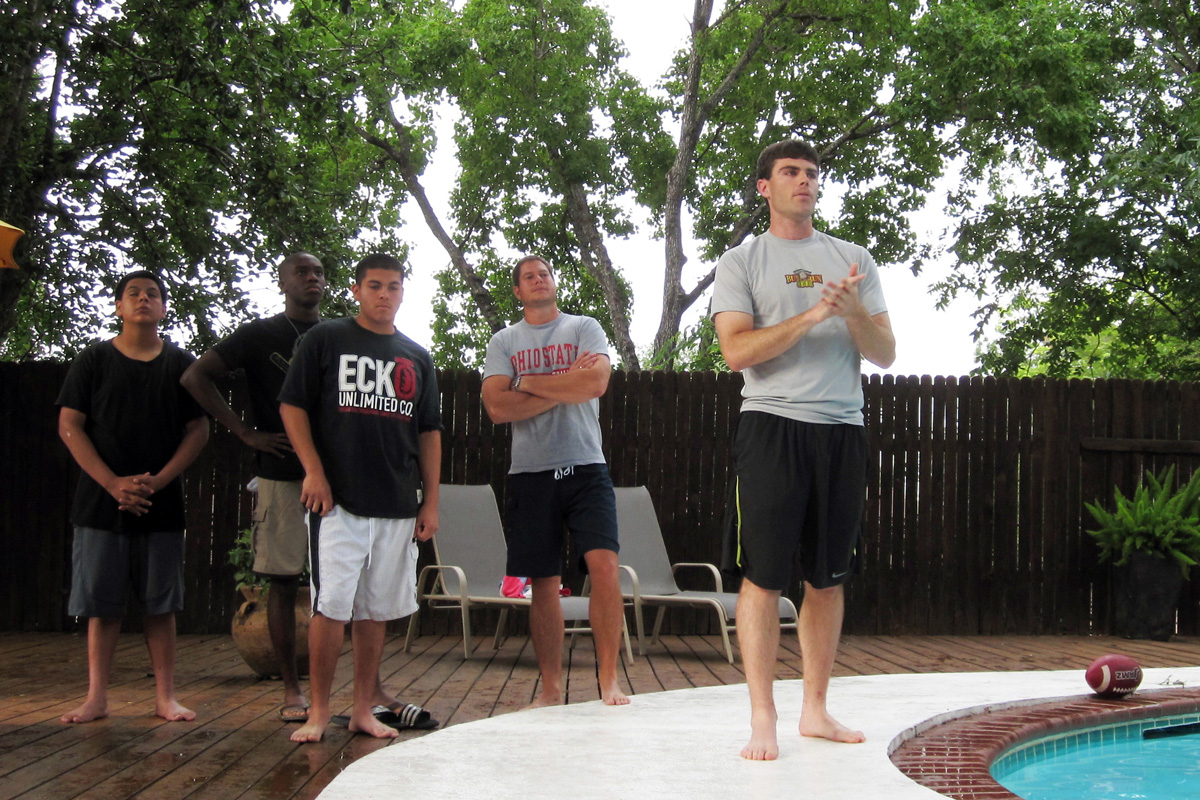 Alex Martin Gonzalez submerged himself into the pool, chest deep with a smile that could not be tamed. He looked around at his coaches, Matt Price and Casey Baeslack, who flanked his sides, and his teammates, who were watching from outside the pool. Everyone was waiting excitedly. Their eyes were focused on him, and their hands clasped ready to make a cheerful noise.

"I'm here because I believe God is our Savior, Jesus died for our sins, and I want to show the world who I am in Christ," he said.

And with a deep breath, he went under and rose to an uproar of cheering and clapping. Alex had just been baptized.

A senior at Lanier High School in Austin, Texas, Alex is a veteran baseball player with the For the City Network's Reviving Baseball in Inner Cities Austin (RBI), a program that uses sports and mentor relationships to engage and develop the youth of inner-city Austin. He first joined RBI Austin's Player Development Program—a mentorship group aimed to grow a player in mind, body, and spirit—in hopes of understanding the Bible. Three years later, he said it makes more sense to him now than ever, and he wanted to openly declare his faith through baptism. That's when he went to his coaches with the idea.

"I went to [Coach] Casey and asked him what being baptized meant," said Alex. "I'm preaching the Word and sharing it with other people, but I figured I hadn't been baptized yet so maybe I should."

According to Matt Price, founder and director of RBI Austin, baptism is a public declaration of a person's faith in Jesus Christ and is symbolic of Jesus' death and resurrection on the cross.

After Alex expressed interest in being baptized, the invitation was extended to the rest of the Lanier Vikings player development group. Teammates Divine Ntomchukwu and Robert Carlos Obando and Coach Baeslack stepped up. This was RBI Austin's first baptism ceremony.

"These guys have already placed their faith in Christ, repented of sin in their life, and realized that they need a Savior," Matt said to the intimate gathering of parents, teammates, and friends. "They know their salvation is not going to come through works; it's purely by the grace of God, and His forgiveness of sins through Christ's death on the cross and resurrection. That's why we're here tonight. These guys are ready to publicly declare their faith and commitment to Christ, and we are really, really excited."

Robert, a sophomore, said that RBI has helped him understand what it means to be a follower of Christ over the last year, giving him confidence in his faith to share it with others. Divine, who had been baptized as a child, said he wanted to be baptized as an adult to show his friends and family that he truly believed the Gospel.

For Coach Casey, this baptism was a long time coming. He said he didn't want to be baptized by just anyone. He wanted the baptism to be with people he knew and loved—his Lanier brothers.

"When you're with people who care about you, and you care about them, things mean a lot more," Casey said. "On top of that, you throw in the presence of God here tonight, and the symbolism of what this is, and the command that God has, it's kind of overwhelming. You can't put it into words."

As Coach Casey spoke, his eyes watered. "Austin is a town where people come and go," he said. "Often times, more people go than they come." To him, RBI has been a staple in an ever-changing environment of people.

"RBI is something that God has given to me just as consistent as he has been," he said. "RBI Austin is a Godsend."

Coach Casey has been involved with RBI Austin for five years, prior to the conception of the official organization. He serves as a baseball coach and leads one of the player development groups. To Matt Price, Coach Casey's faithfulness is what makes him stand out the most.

"Sometimes you can be faithful in life and faithful in your walk with the Lord, but you don't see the result of that immediately," Matt said. "So for me, tonight is really exciting for Casey. These guys have been discipled in the Word of God and developed in Christ by this man. I am proud and privileged to be able to baptize Casey."

It was a night of transformation for the RBI Austin family, all because a single player had the faith and courage to step up to the plate.

Now that he has been baptized, Alex said he wants to continue to share his faith and become a leader at his school, especially for those who don't know Jesus or have the mentorship he has been blessed with.

"There are a lot of things that happen in high school that people regret," Alex said, "and I don't want that to happen to me or to my teammates. I feel like if they had the Word of God, their lives can be impacted like mine."