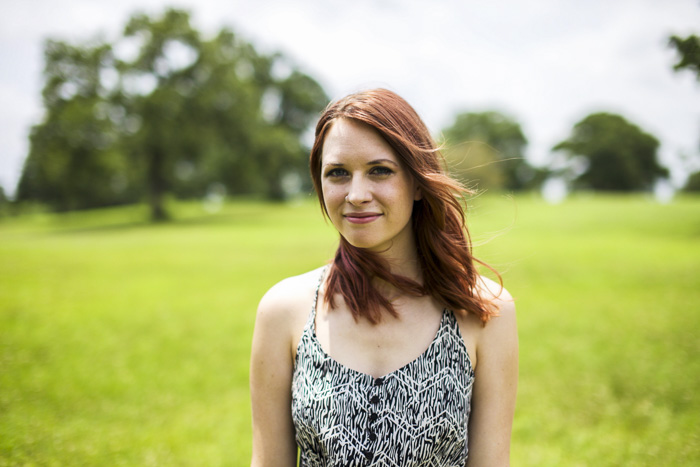 “It is a very weird spot to be in—to know the truths of the gospel in your head, but feel nothing. How can you be expected to feel anything toward God, when you feel nothing toward anything?”

As an adolescent, Lyndee began a journey through many deep and troubled episodes of depression. For years, she struggled to not only find joy, but to feel anything at all.

Lyndee understood God’s joy in theory, but in her depression, she struggled to understand and grasp God’s joy personally. She struggled to feel God’s presence in her life. Mentally, Lyndee’s depression left her confused and deflated. Physically, it led to self-harm, and Lyndee burned herself as a way for her to feel something.

“I had the gospel, and I believed in God,” she recalled, “but there was a disconnect between that and actually being able to feel and experience joy.”

While the feeling of joy Lyndee craved eluded her, the feeling of pain brought temporary relief. After Lyndee’s mom confronted her about physically injuring herself, Lyndee guiltily quit the burning. Although the outward damage stopped, the inward problem remained, and led to other, less apparent types of self-harm.

Lyndee would sit outside in cold weather without the proper clothing, or she wouldn’t eat when she was hungry. But despite her efforts to feel physical pain, Lyndee remained numb. “When you are numb, you just don’t feel anything,” she remembered, “which is where I was most of the time.”

Years later, when Lyndee turned 17, she moved to Colorado to attend an art school. Her depression traveled across the states with her, growing worse in her isolation.

Lyndee, somewhat aware of the severity of her depression, began to self—medicate as a way out of the darkness. But her use of alcohol did not help, instead it quickened her downward spiral. Lyndee realized she could not fight the depression alone. She decided to seek help from a church, even after receiving confusing messages as a teenager.

Reeking of alcohol and cigarette smoke after a night of partying, Lyndee entered a church service one Sunday in a back building of a deserted carnival. After the service, a pink‑haired young woman and her family offered to take Lyndee out to lunch. One lunch led to two, and eventually the family’s home became a refuge from Lyndee’s lonely, dark apartment.

“I didn’t even know these people, but they would stay up late talking with me,” she said. “They let me sleep on their couch and left me breakfast on the table when they went to work.”

Lyndee encountered a different aspect of community, as she experienced the love of Jesus through her caretakers. This lit a spark, but her struggle with depression and pursuit of joy was not over.

A few weeks later, in her car outside her apartment, Lyndee sensed God’s call to leave Colorado and return home. She dropped out of art school, and when she got home, Lyndee questioned why God called her back. Her depression was now outwardly evident, and Lyndee’s parents saw a different person than the daughter they knew, with no real idea of how to help her.

The message she heard from people in her local church was that if she had more faith, she would be fine. Though they prayed for Lyndee’s spiritual strength and encouraged her to join a Bible study, or to read certain books, Lyndee’s physical and deep emotional scars were ignored. Lyndee returned to self‑harm, now cutting herself, and her depression worsened with obsessive suicidal thoughts, which would not go away.

One night she was overwhelmed by thoughts of suicide. “I tried the best I could to fight the thoughts,” Lyndee said. “But when you are depressed, and your brain is not producing the right amount of chemicals, it is like fighting a battle without any weapons. You have nothing to fight with. My mantra became ‘I am going home. I am going to take my allotted daily medication. I am going to go to bed.’”

But instead of following her own formulaic advice, Lyndee swallowed half a bottle of aspirin. By God’s grace, Lyndee remained alert until her parents arrived home, and they rushed her to the emergency room.

In the ICU, the toxins in Lyndee’s blood continually measured to a point far beyond critical. Lyndee remembers seeing her dad in the corner of the room, his head in his hands after hearing the doctors tell him they had done everything possible for his daughter.

Lying there, Lyndee knew her fight was over, and her body was giving up. She knew she couldn’t do anything else on her own. “I was desperate for something and I didn’t know what it was.” So she prayed a simple prayer: Lord I can’t do this. I need you to take it from here.

A peace came over Lyndee. She looked up at her dad sitting in the corner. “All you have to do,” she said, “is wait until they take my blood the next time, and my toxin level will be down.”

And Lyndee was right. Her blood levels stabilized, and she was released to go home under the care of her parents.

Lyndee believes God performed a miracle and healed her. Over the course of several years and with the help of doctors and medications, Lyndee went from feeling numb to being able to function. She co‑owned and operated a small coffee shop, learned to communicate well with others, started going to church, and found victory in leading a very basic life. She felt joy in the small moments of life, following a God who loved her regardless of her past.

Looking back, Lyndee credits much of her recovery to the unconditional love of Christ, shown through her Missional Community group at The Austin Stone Community Church. Teaching her how to live life after depression, God used her MC to show her more of his character and his unconditional love for her. Lyndee was finally experiencing the love of Jesus, finding joy in his love. “I met people who loved me and showed so much grace when I came to them and confessed my sin,” she said.

She has learned how to forgive those who misunderstood her depression. Today it is important to Lyndee that those around her have a better understanding of what depression is, and that believers begin walk alongside others who struggle with it.

She still has days when she feels down, but clinical depression is no longer a part of her life. Lyndee is growing in her knowledge and understanding of Jesus, and in her awareness of Christ’s love for her. She feels God’s joy through the work of the Spirit in her.

“I have found out more about who I am, learning how to cope with things in a healthy manner,” Lyndee said. “I know joy is knowing you have God no matter what—and that God is sufficient.”