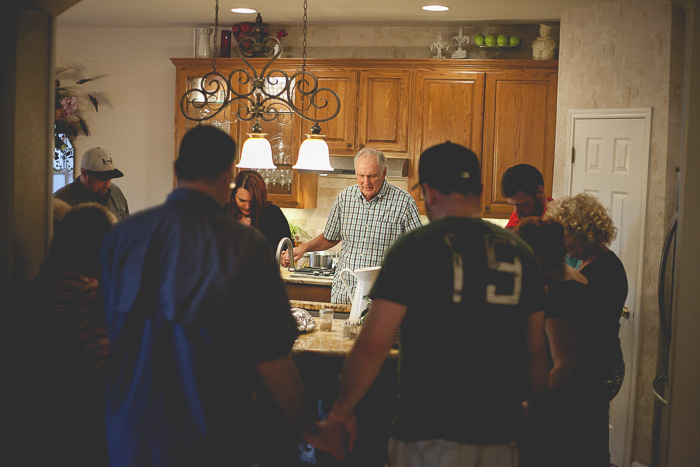 After the last neighbor left, Debbie softly closed the front door. Eyes wide and hands covering her mouth, she turned to her husband and gasped, “Did you see that? Bobby, did you see that?”

Bobby couldn’t utter a word. Half stuttering, he said, “That had to be the Holy Spirit. It had to be.”

Bobby and Debbie Kopetsky marveled over the happenings of that night for hours. It was only the third time their neighbors came over to talk about God, and faith was already stirring inside everyone in the group.

Fifteen years earlier, the Kopetskys moved into their redbrick home on Amen Corner Road in Pflugerville, Texas. They smiled and kindly waved at their neighbors on their frequent walks, and Bobby chatted with the men at the neighborhood golf course. The interactions were brief––surface level at best. “You could recognize one another in the grocery store, but you wouldn’t know anything about their life,” Debbie explains.

In August of 2013, Bobby and Debbie heard about “Explore God,” a 7-week study series for churches, small groups, and anyone who had questions about faith and God.

The Kopetskys looked at each other, their faces saying it all: We have to do this in our neighborhood. “It was the Holy Spirit moving in us. God gave us the idea. He gets all the credit,” Bobby says.

A few weeks later, Bobby and Debbie laced up their shoes and went door-to-door on Amen Corner Road. They invited their neighbors over for dinner to explore those hard questions about God––something that neither of them, in over 30 years of being Christians, had ever done before. “We thought to ourselves, If we don’t make disciples now, when will we do it?” Debbie says.

Bobby held Debbie’s hand and took a step onto the first front porch. He glanced down the block as he said, “God, it’s all Yours.”

“Our invitation was simple,” Debbie remembers. “I just asked them if they wanted to come over for fajitas and have a conversation about God.” Some neighbors didn’t make eye contact, some said they weren’t interested in faith conversations, and some didn’t open their doors. But some were excited. Some were intrigued. Some were searching.

A total of nine neighbors showed up on the first night. “We were excited about what God was going to do,” says Debbie. As they looked around the circle of neighbors, Bobby and Debbie sensed that everyone was eager to learn more about God. But when the conversations started, it was clear that not everyone believed God is real, that He is good, or that Jesus is their hope.

In fact, some of their neighbors had never opened a Bible before. One neighbor lost his parents at an early age and blamed God. Another neighbor was raised to hate Christianity. “There were a few who had some biblical background, but they didn’t really follow through. It was like they believed Jesus, but was Jesus their Savior? They didn’t know that. They couldn’t tell you that,” Debbie says.

For the next seven weeks, the group continued their discussions, despite the discomfort and doubt. As leaders, Bobby and Debbie didn’t always have all the answers, but God kept bringing the neighbors back each week. “It’s just about being obedient to what God is calling you to do. You don’t have to have all the answers,” Debbie explains.

On the last night of the study, the group aimed to answer the question “Why does God allow pain and suffering?” One by one, everyone shared their experience with suffering.  A father had passed when one neighbor was only eight years old. Another neighbor’s mother gave her up for adoption after two weeks. It was a circle of brokenness and pain.

But there was a problem—an unspoken assumption: Bobby and Debbie seemed to have it all together. It appeared as though the Kopetskys never experienced real suffering.

After all had shared, Debbie knew she, too, must break down the barrier and open up about her own pain. Debbie slowly gazed around the circle. “I was widowed when I was 32. I had three children,” she said, her voice catching in her throat. The room went completely silent. Wiping the stream of tears from her face, Debbie continued, “To this day, I don’t know why. Why did my children have to suffer? I don’t know. How was that in God’s plan? I don’t know.”

From there, Debbie and Bobby told the story of their marriage. They met over 25 years ago, when the boys were still in elementary school. In that moment, the group saw that Debbie and Bobby’s faith wasn’t built on a life of smooth sailing. By God’s design, their lives stood on a solid rock—on something bigger. Someone stronger. Everyone was pointed to Jesus that night.

The study series was nearly over, but no one was ready to end the Sunday night gatherings on Amen Corner Road that brought everyone so close together. “You know, we only have two more weeks to go. What are we going to do now?” asked Katie, one of the members. Her husband, Chris, replied, “Let’s study a book of the Bible, and let’s do homework!”

So, they did just that.

Over time, Debbie became familiar with the eyes-wide, hands-covering-her-mouth routine. She was in awe. God was stirring faith in her neighbors.

Now, two years after their first meeting, the group continues to gather regularly for dinner and time in the Word. What started out as a group of nine neighbors has grown to 15 today. “They say Jesus is their Savior,” Debbie shares.

Bobby adds, “One of the men in our group is a lifeguard. When he’s not busy, he’s doing his homework for our study. He even invited a couple to join us!”

One woman in the group confessed that the Word of God has restored her relationship with her daughter. Another neighbor said the group is like a family to them. “Now, they pray. They all pray,” Bobby adds, beaming.

And they love one another. In October 2015, Bobby and Debbie got a call that changed their lives forever. Their middle son, Tyler, suddenly passed away. “We were devastated,” Debbie remembers. “Our group was devastated right along with us. They cried with us, and they came over. They were all at the services. They all came to the house. They were at our side.”

“We know that we should let our light shine,” Bobby says, “because God says that we will have pain and suffering in this life. And we know from Scripture that we should use this to glorify Him, so that’s what we want to do.”

Chris, who once said he only believed about 80% of the Bible, says he now believes in it 100% after seeing God’s goodness in the Kopetskys’ loss of Tyler.