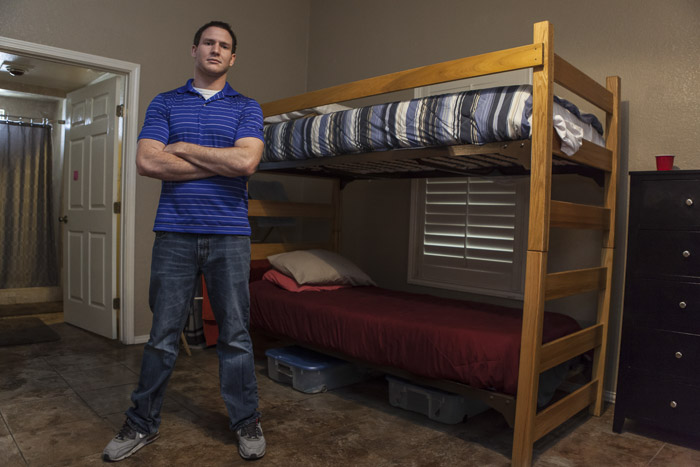 It was late, and 21-year-old Alex Scaro didn’t think anyone would be awake to find him strung out in his room. But then Alex’s father opened the door to find him in a haze—and bags of heroin strewn about him on the bed.

“I remember that my father referred to me as the cancer of our family,” Alex remembers. “He said I needed to be cut out and removed because I was affecting everyone else’s well-being.”

He was a far cry from the all-American boy he’d been just a year before. Alex had grown up in a small Midwestern town where he’d been a good student and an even better athlete. Football defined Alex. It gave him a mission (to win), an identity (captain of his team), and community (his teammates). Football was Alex’s god, and he poured himself into it. “Everything revolved around football,” he remembers. “My behavior in school, my grades … I made sure I behaved for football. I didn’t drink for football. I didn’t smoke or do drugs because of football.”

But a long string of injuries left Alex ineligible for a college career and—just like that—football was gone. And suddenly the god that had kept him in line—kept him away from drinking and drugs— had vanished.

He tried pot for the first time. In just a few short months, Alex went from trying his first joint to smoking marijuana all day every day. He depleted his savings to afford his new habit, and when his money was gone, he began to sell the drug so that he could afford to buy it.

Where football had been a benevolent dictator, drugs were a demanding tyrant that was never satisfied. Soon, Alex moved from pot to prescription opioids like OxyContin, which are far more dangerous and expensive. Alex began to sell them, too, and looked to his friends as customers and ultimately as converts to his addiction. Around the time that Alex became most dependent on OxyContin, it started to become harder and harder to find. Pharmaceutical companies reformulated the pills to make them impossible to crush into a powder that could be snorted or injected, and many who were addicted to these prescription painkillers were pushed to even harder drugs.

The first time Alex did heroin was in his friend’s car. He had avoided this particular drug because the complicated process of preparing it intimidated him, so his friend walked him through the twisted liturgy. Alex watched as the needle sunk into the crook of his arm and he saw his blood drawn back into the syringe to intermingle with the liquid heroin before being plunged back into the vein.

It’s a cruel trick of heroin that no subsequent use ever produces the effect of the initial high. Addicts will give anything for just a taste of that first euphoria and, indeed, Alex sacrificed thousands of dollars, his health, and his relationships while chasing that high. Shortly after his father confronted him in his bedroom that night, Alex decided that the only thing left to place on the altar of his addiction was himself. He came home from work one afternoon and intentionally overdosed with the intention of taking his own life. Fortunately, Alex was found by his father and rushed to a hospital where he started the painful march of recovery.

His initial steps were a laborious waltz of short-lived sobriety and disappointing relapses. Through tears he would swear to his parents that he’d never use again, all the while never believing it himself. His addiction had become so enthroned in his heart that he would never be able to unseat it.

Eventually Alex checked into a long-term facility in Manor called Benchmark Recovery Center. Part of the recovery process was regular meetings with other addicts and, in one of those meetings, he was challenged to join a group that met early in the mornings to walk through a devotional book called Jesus Calling. Despite the fact that neither Alex nor anyone else in the group was a Christian, there was something intriguing about what they discussed. Alex became so involved in the discussions that he was eventually asked to lead the group.

During this time, Alex was also given a Bible, which he began to read during morning devotional times. As he read, the words challenged the notion of the impersonal god he recalled from the Sunday school lessons of his childhood and replaced him with a God of flesh and blood—Jesus—who knew Alex in a personal and intimate way.

While Alex’s heart began to soften, his mind remained unconvinced that his recovery would produce any lasting change. “I thought that as soon as I was done with the program and my parents brought me back home, I was going to do drugs.”

As Alex counted the days to his return home, he attended an Alcoholics Anonymous meeting where he met a man who invited him to The Austin Stone Community Church. He accepted, and despite never seeing the man after that first Sunday, Alex continued to go back. To avoid going alone, he invited his roommate, Bob, who had walked through treatment with him. While neither knew exactly what drew them to church, they continued to return week after week, and eventually Alex started to serve at the church.

The heart is like a throne that cannot be left vacant. In Alex’s case, his throne had been occupied first by athletics, then by addiction, and finally by the King who created it. Jesus will not share His throne and, for Alex, sobriety became a lasting mark of his new, rightly ordered worship. In spring 2014, Alex was baptized.

Alex now uses his past to lead others by participating in recovery programs and sponsoring other young men who are fighting addiction. Where Alex had once been called a cancer, he now offers a cure: the gospel, which is far more powerful than any idol and far more captivating than the most alluring drug.