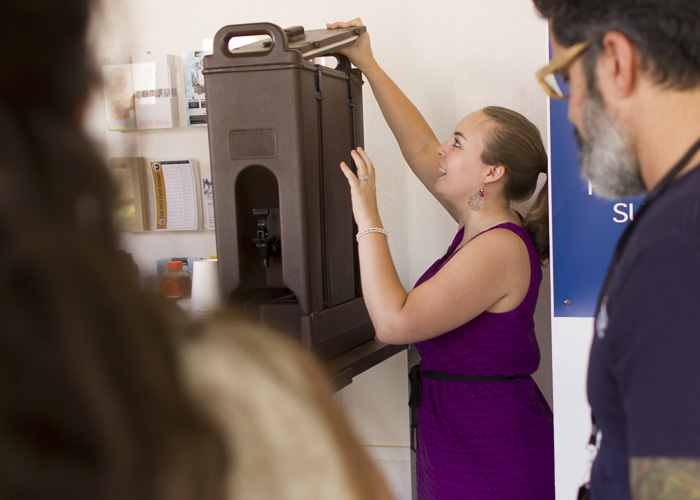 During premarital counseling, Megan and Joe dreamed of a marriage rooted in serving their community and each other. Neither of them expected that just a month into their marriage, the simple act of walking or sweeping the kitchen floor would become unbearable for Megan. Constant pain and unending fatigue made balancing work, community, and her new role as a wife nearly impossible. Needing answers, Megan and Joe began the nearly year-long search for a diagnosis. After close to forty visits with doctors and specialists, Megan was told she suffers from fibromyalgia, a low immune system, and a bulging disc near her sciatic nerve.

The diagnosis changed everything. “Here we are a month into ‘sickness and health,’ and I’m sick,” Megan explained. “The challenges we have, normal twenty-something couples don’t have.”

Calling themselves “Team Schutz,” Megan and Joe reframed their picture of marriage. As someone who loves to serve others, it was difficult for Megan to depend on her husband and her community for things like household chores and meals. “I feel guilty asking for help. It means that I have to admit that I’m not doing okay,” Megan said. As she slowly came to terms with her new role, she began to realize that she would need the help and support of her co-workers as well.

Despite her constant pain, Megan took a position as the resident for Connections and Women at The Austin Stone Community Church’s North Campus. However, it soon became clear that this new position would require long work weeks and more energy than she had to offer, and Megan began to question whether she could do the job well. But it didn’t take long to see that her God-centered work environment would offer her unconditional support. Just as her husband had done, her boss and team rallied around her. “They’re very protective of me,” Megan said. “God knows, and he’s given me people. I’ve never felt more taken care of.”

For so long, Megan tried to earn God’s grace by doing things—finding her value in actions and service. Through her pain and dependency on the people in her life, God showed Megan just how much he loves her. “My worth can no longer come from what I do. What I do is not constant. It’s not reliable. Most often, it’s not complete,” Megan shared. Instead of looking to the world for her value, she sought the constant, unwavering truths of Scripture. “He gave his only son for me because I’m precious and honored in his sight. That’s the extent that he loves me. Not being able to sweep my floor doesn’t change who I am or how much I’m loved,” Megan said.

As Jesus ministered to her heart, Megan began to see him working through her Missional Community group. “Everything in my life right now feels like a burden,” she shared with her MC. “I hate to not be okay and not together.” She also shared how she had been angry with God, and that the shame she felt over her anger had caused her to run from God and his Word. One of the women in Megan’s MC group reminded her that the truth of the gospel is all she needs. As Megan turned back to the Scriptures, she continued to find comfort and see that Jesus sympathizes with both her illness and her frustrations with it. “He understands. I’m not just free-floating. I can bank on the fact that what is going on with me is not outside of God’s plan,” Megan stated.

Though she trusts that God has her in his hands, the realities of her diagnosis can be overwhelming in the day-to-day. The constant bouts of pain and fatigue, coupled with the fact that fibromyalgia has no cure or set plan for treatment, means Megan lives life in the unknown. She wakes up every morning uncertain of how much pain she will carry, and on the days when the uncertainty overwhelms her, Megan roots herself in the eternal. The promise of a perfect body, free from sin and pain, is a stronghold on the days when the pain is all-consuming. “Heaven is very real to me, and I long for it in a way that others my age don’t.”

In the beginning of her journey, and in many moments along the way, she has wished for a cure, a set treatment, a day without pain. Yet, through the support of her husband and her church family, she has grown in her trust that God is a promise keeper, and that she will one day know what it is like to live pain free. It just might not be this side of heaven, and by the grace of God, she has made peace with it.

“I do feel broken—not as good as other people. Even though there’s worth in my weakness, sometimes I do feel discounted or less worthy. But, it’s okay to not be okay, to not have resolution, because that’s real life, and Jesus’ blood covers it. When the little things are stripped away, he makes you believe. You realize that Jesus is better.”