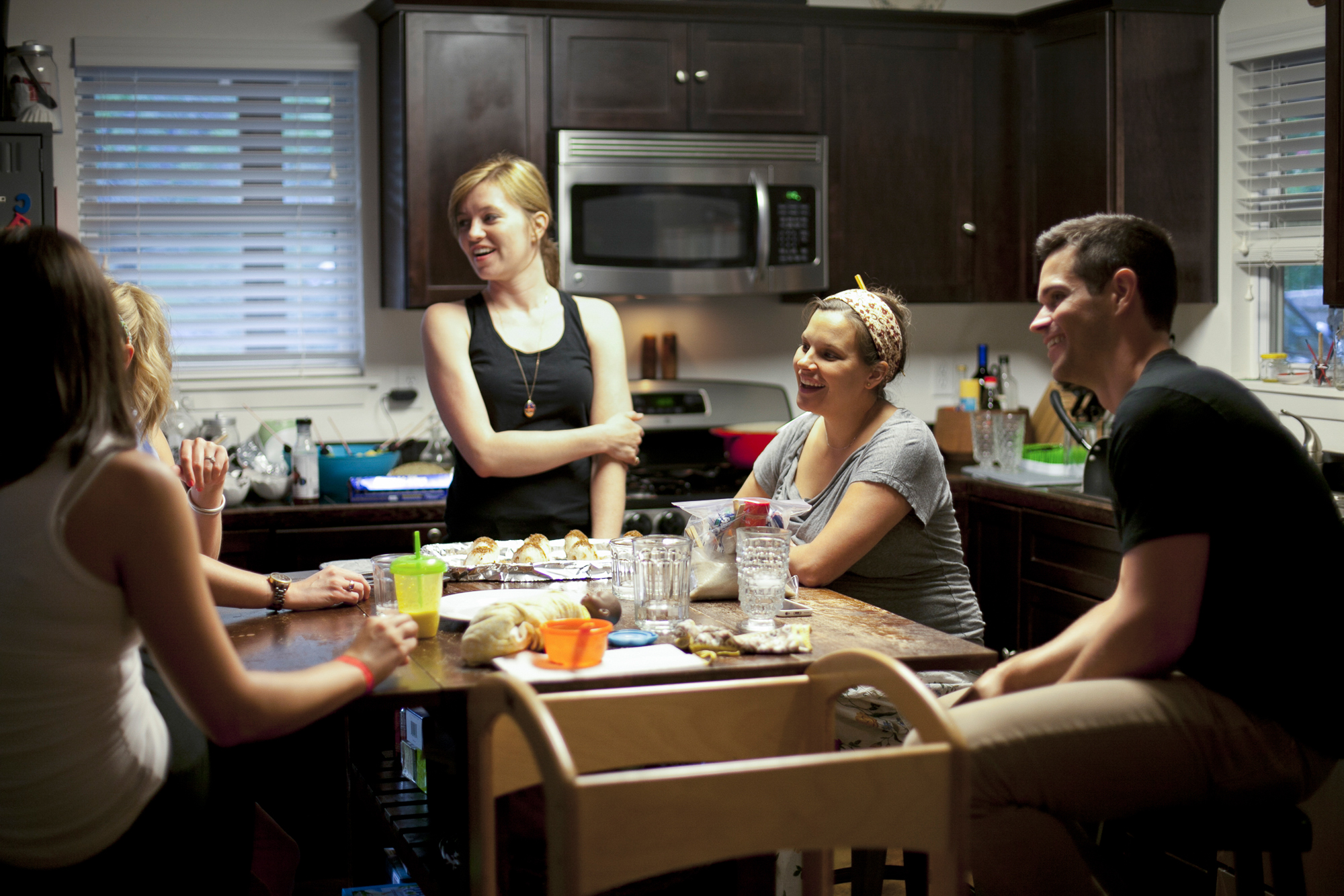 Speeding down Highway 71 toward a Houston hospital where her brother-in-law lay dying, Jill Garcia began praying out loud with her husband, Mike, for the first time in her life.

At age 11 Jill believed the gospel, but throughout high school she struggled with finding community and a sense of belonging at church. In college, Jill sought satisfaction from drugs and relationships, and her faith became stagnant.

“I always knew that’s what I believed, but I wasn’t really strong in my faith,” Jill said.  “I would pray from time to time if I remembered, but I was living in a fog.”

The Garcias were married and living in Austin when Jill became friends with Kari while working at an art studio. During a weeklong project, the conversation turned to church, and Kari invited Jill to her Missional Community group. Jill agreed and soon Wednesday night dinner with her MC group was a regular part of her week.

“Kari and the girls in my MC are amazing. They made me feel really comfortable. At first, I was nervous because of my past, but they made me feel like I could share what I wanted to," Jill said. “I feel like God put them in my life at just the right time.”

Mike started joining Jill on Wednesday nights, and the couple began attending The Austin Stone Community Church. Through hearing the teaching of the Bible, and experiencing deep friendship within her missional community group, Jill’s faith began to strengthen.

Then on December 8, 2012, Mike got a call. His younger brother, Bubba, had been hit by a car and was in the hospital. Jill and Mike immediately jumped in the car with their 3-month-old daughter, Stella Rae, and began driving to Houston. It was during that drive Jill was first overcome with the urge to pray.

“I prayed for Bubba to live and then called Kari and the women in my missional community and asked them to pray. We didn’t really know what was happening,” Jill said. “But I just thought, ‘We need to pray right now.’"

Upon arriving at the intensive care unit, the Garcias learned Bubba was in a coma and joined Mike’s family to go and see him. Standing in the hospital room with Bubba, Mike, Mike’s brother and her in-laws, Jill felt a call to speak.

“I started talking to him and telling him that we were here for him. I was rubbing his arm and his hair. I’ve never gotten that close to him or felt like I cared that much,” Jill said. “And then, I prayed over him. I remember feeling scared to do that, but I just knew I had to. It had to be done.”

When Jill came into Mike’s life roughly a decade earlier, she and Bubba almost never saw eye to eye. With their history, Jill says, it was strange she would be the one to pray next to his bedside, but she felt the tug and was obedient.

The next three days were excruciating for the Garcia family. They endured conflicting information on Bubba’s progress; glimpses of hope came with reports that tissue in Bubba’s leg was still alive, only to be followed by devastating news that it wasn’t looking good because of severe internal bleeding. Through all of this, God drew Jill close to him, and she constantly sought the Lord for guidance.

Jill spent the entire second night in Houston on her knees praying Bubba would be healed. On her way to the hospital the next morning, she asked God for a sign.

“I was driving up the ramp of the hospital parking garage and I see a tow truck in front of me. Its gears were raised and formed a huge white cross.” In that moment, Jill said, she knew everything would be OK.

Later that day, the family gathered in Bubba’s hospital room to see him before his final surgery. It was pivotal because doctors needed to find where the internal bleeding was coming from, and Bubba needed to make it through. Once again, Jill felt the Holy Spirit nudging her to speak. Bubba, along with his brothers, loved playing soccer, so it felt appropriate that her encouragement came in the form of a pep talk.

“The last text message Bubba ever sent to Mike read ‘No pressure, no diamonds,’ and I just told him that this was it,” Jill said. “This was the game-winning goal, and it was time for him to perform. He had to make it through.”

Feeling completely at peace, Jill prayed for Bubba, and the doctors took him into surgery.

Later that day, the family learned Bubba wasn’t going to make it. As they were saying goodbye, Jill remembers feeling peace and hope in the midst of pain.

“After you have suffered a little while, the God of all grace, who has called you to his eternal glory in Christ, will himself restore, confirm, strengthen, and establish you.” 1 Peter 5:10

Around the one-year anniversary of Bubba’s death, Kari gave Jill this verse. Ever since, the words have been a source of strength and courage for her.

“Those words couldn’t be more true,” Jill said. “God is the only thing keeping me going.” The last 18 months of grieving have been incredibly difficult, but God continues to give Jill the strength to love her hurting family well, and to speak truth about God’s love through it all.