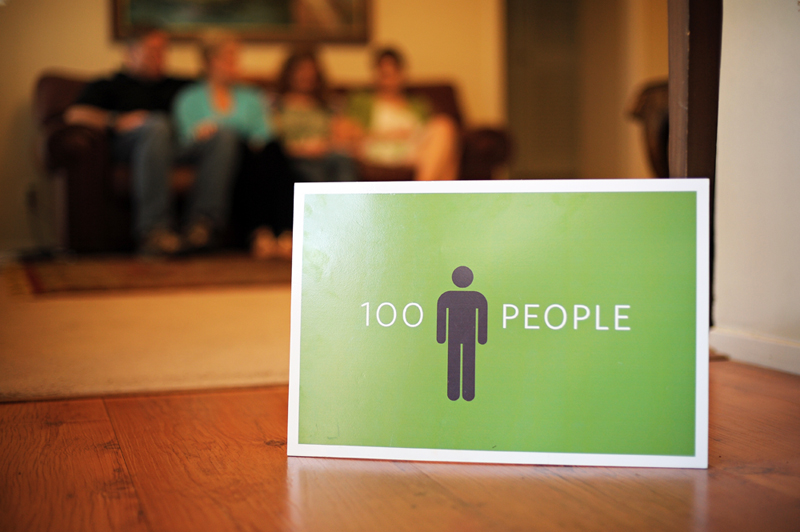 "She's not my child. I came to the realization that these beautiful daughters I call mine are not. Ashley belongs to God. If he's ready to take her back to be with him, that's fine," said Theresa Chandler as she remembered her daughter's brush with death in May 2011.

Tony, Theresa and their two teenage daughters, Ashley and Jane, are peaceful, hopeful, calm and confident. After talking with the Chandler's for just a few minutes, it is obvious why they are so nice to be around: God is their source. Their relationship with God, their Father, runs deep and because of what He did for them.

In November 2010, God called the Chandlers to prepare to move to the Middle East as part of the Austin Stone's 100 People Network. Fundraising had started, their family was moving into a temporary home, and – after being laid off from his job – Tony began to work toward moving their family to the Middle East.

During Thanksgiving, Theresa and the girls spent the holiday with family while Tony traveled to the Middle East on an exploratory trip. One evening, without warning, Ashley got sick. This healthy, athletic young woman found herself exhausted when she simply walked across the room. God gently spoke to Theresa: Go to the ER. There they learned that Ashley was in heart failure, kidney failure and had fluid in her lungs.

With Tony in the Middle East, the Chandler's missional community sprang into action. They moved quickly to help Theresa and Ashley in whatever ways they could. They prayed, arranged for Skype calls, brought food, and spent an entire day in the hospital waiting room praying. Meanwhile, Tony's team on the trip with him also began to pray and arrange for him to catch the next flight home. Remarkably, Theresa and Tony say that they knew God was in this situation with them. They never felt panicked. Theresa said, "I knew God had her."

Tests revealed that Ashley had a rare disease causing inflammation of the arteries, a diagnosis that typically goes undetected until a catastrophic event occurs. It's plain to see that God was involved in Ashley's early illness and diagnosis. She was released from the hospital after a month-long stay and was home for Christmas.

Then, in May, Ashley's blood pressure unexpectedly shot up again. Unable to bring it down, doctors at Dell Children's Medical Center suggested that Ashley be flown to a nephrologist in Cleveland, Ohio. Ashley underwent an angioplasty and renal artery bypass surgery. During the surgery, Ashley crashed and doctors administered CPR. Twice. After a grueling 12 hours of surgery, Tony and Theresa were finally told that their daughter was successfully out of surgery.

Again, the Chandler's missional community sprang into action. People prayed and sent out the message to pray and the word spread. A few members of their community even traveled to Cleveland to visit with the family while Ashley was hospitalized. They soon realized that Ashley was about to miss her high school graduation ceremony, so the community petitioned the school and creatively made arrangements for Ashley to participate via Skype with balloons, cake and, of course, a cap and gown. As her name was called to walk the stage during the ceremony, Ashley heard the Frank Irwin Center erupt into cheers as the hospital staff simultaneously broke out into applause.

During their stay in Cleveland with Ashley, the lease on the Chandler family's house expired and they needed to move. Their community packed, moved and unpacked the family in their new house. Their furniture was placed in exactly the same place as their previous home, even down to the smallest detail. When the Chandlers came home, their dishes were in the kitchen cabinets and their clothes were in the closets. Their missional community also helped pay for the family's return plane tickets and put together a fund to help with Ashley's medical bills.

Sharing life together in this missional community went to the extreme. As hospital staff, friends and family watched people care for the Chandlers, Theresa and Tony made a point to be intentional about telling them what God was doing in their lives and the support their missional community gave them. They boldly told them, "This is the way Christ's people act!"

Today, the Chandler's have a story to tell; a story of God's faithfulness and how He uses His people to meet the needs of his children. They said, "This is a story to God's glory. When you're living for Christ and not the world, you're going to have trials. It's going to happen. One way to prepare is to be in a missional community. We couldn't have endured through this experience without the love and support of our missional communities."
Tony, Theresa, Ashley and Jane Chandler are planning to leave for the Middle East in the summer of 2012.