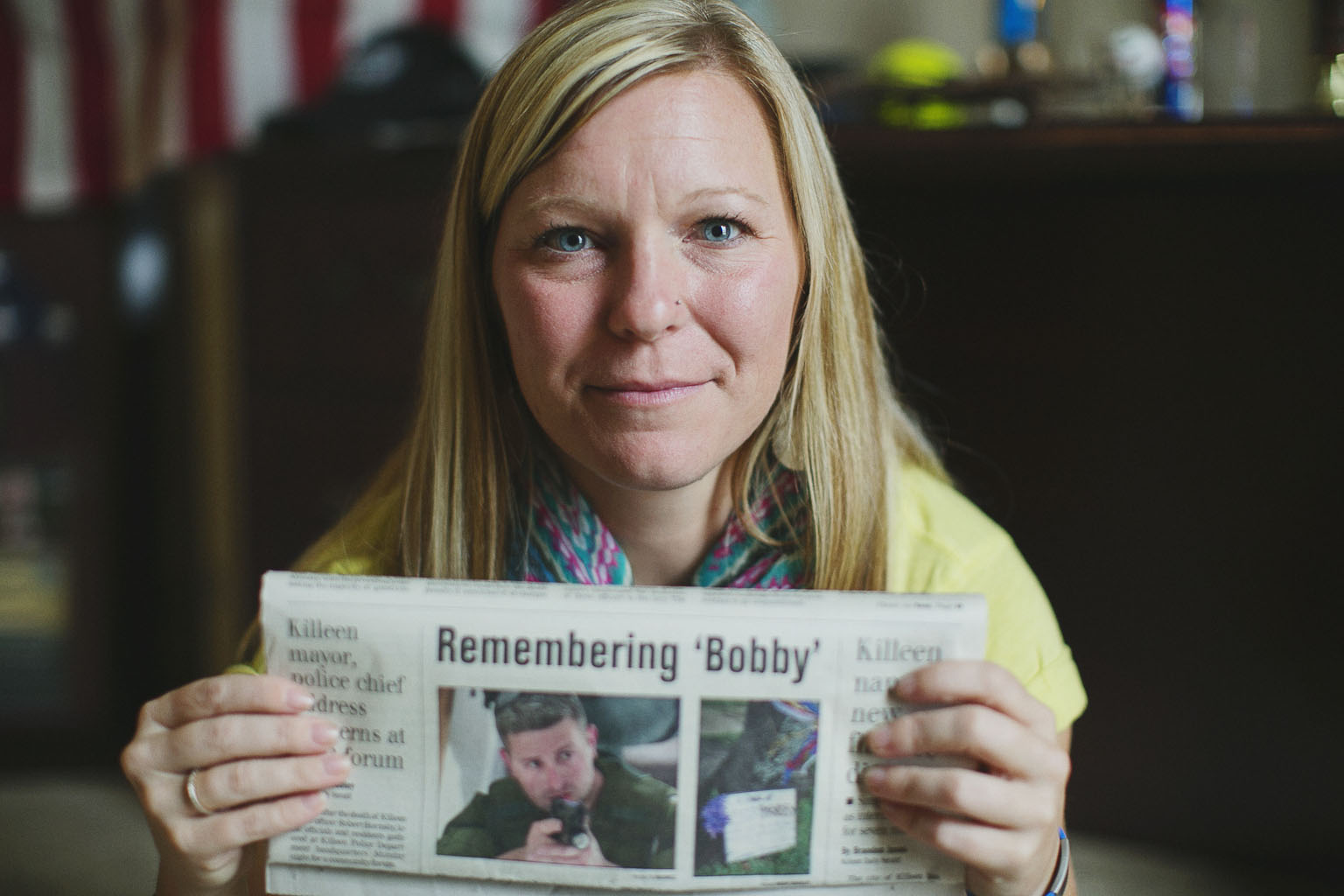 On July 14, 2013 Kimberly Hornsby received news that would forever change her and her children’s lives. Her husband, an officer on the Killeen SWAT team, was shot and killed in the line of duty. In a yearlong season of pain and suffering, the Lord is teaching Kimberly how to choose joy in the face of trials and how to completely depend on Jesus.

Kimberly and Robert Hornsby were married in June of 2007. They had two beautiful children together: Layden, who is now six, and a two-year old boy named Braxx.

Robert – or Bobby, as his friends knew him – joined the SWAT team in December of 2012. He was killed only seven months later.

The day he died, Bobby responded to a SWAT call after working an off-duty shift. An intoxicated man in an apartment complex had locked himself in his home after threatening fellow residents with an AK-47. After failed negotiations, Bobby and his team rushed into the apartment where he was shot multiple times. Bobby died instantly.

“When he started in SWAT, people would always ask me if I was nervous or scared. I always told them the same thing, that I felt like his life was in bigger hands and that I trust God. Looking back, I don’t think that is really how I felt. I thought God was going to reward us for living the church life,” Kimberly recalls.

Since the day Bobby was killed, Kimberly’s walk with Jesus has been completely turned upside down. Before, she was a believer whose faith never felt tested and who lived a comfortable life that she refers to as “the church life.”

“I went to church on Sundays, and I sporadically read my Bible and prayed, but with no real intentions. I would have said that I was a good Christian. Losing my husband left me with nothing, and God really humbled me down and he was all I had.”

She lost her best friend and an amazing father to their children. For months, Kimberly would not sleep in the bed that they had shared – it was too painful. Frustration and loneliness overwhelmed her. In the tear-filled moments when it was too hard for Kimberly to function, God started to restore her heart by pointing her to Scripture. She would read about joy in suffering and wonder if she would ever experience it – but God was still at work.

Not only had God been comforting Kimberly through her pain, but he also began showing her how to forgive. At Bobby’s funeral, a woman mentioned that she felt bad for what the shooter’s family had gone through. Upon hearing the remark, Kimberly’s heart filled with anger and bitterness. After some time, though, she felt God telling her that the posture of her heart toward Bobby’s killer needed to change.

“I began to google him and learned his name and who he was. I needed to see him as a person, as someone created by God. I needed to change my heart,” she says.

This change of heart not only taught her about forgiveness, but also filled her with peace. She still faced days filled with hurt and loneliness, but now she felt the presence of God as her source of joy and comfort.

Not long after Bobby’s death, one of his former teammates was also shot in the line of duty. His family attended the same church as Kimberly. Though she felt sadness because of the loss, she also saw the ways in which God had brought her joy – even in the midst of tragedy – and she was able bless his family with support.

“That’s part of sharing our story. Even though it’s painful and it stinks to go through it, the end result is that we want people to know the gospel,” Kimberly proclaims.

When Bobby passed away, Kimberly asked God to give her a reminder that he would always be there to comfort her through the pain. Around the 14th day of every month since his death, it has rained. Kimberly finds peace in the storms because she feels that is God’s way of letting her know that he hasn’t left her.

With the words found in James 1:2-3, God has taught Kimberly and her children to always choose joy, even in the rain.

‍“Consider it pure joy, my brothers and sisters, whenever you face trials of many kinds, because you know the testing of your faith produces perseverance. Let perseverance finish its work so that you may be mature and complete, not lacking anything.”‍

Though Kimberly misses her husband dearly, God has taught her that she lacks nothing in Christ and – in this – she can choose joy.