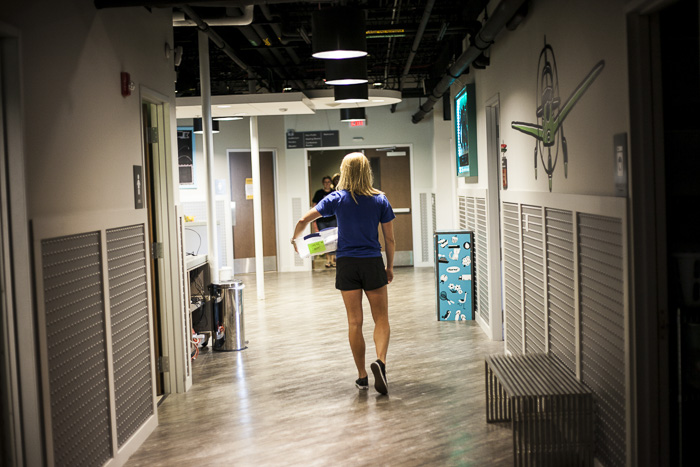 When a mother came up to Ashlin and shared that her son had accepted Christ, Ashlin’s joy was overflowing. The boy was one of Ashlin’s students in the Kids Ministry at The Austin Stone Community Church and his growth and faith resonated with her own.

Serving with this ministry has changed Ashlin’s heart from one that methodically served God out of duty to one that passionately longs to serve God out of love.

When The Austin Stone’s St. John Campus was only beginning, Ashlin volunteered to serve in the preschool classrooms. Though she knew she wanted to serve children, she didn’t really feel a passion for it at first.

“I fulfilled my godly activities in a very legalistic way because that is how I grew up. Believing meant if I do all these good things, then God would show favor on me and I would get eternal life in that way. Volunteering in the preschool, even though I wanted to, was just something I did every Sunday. There wasn’t any thought put into it. It was just going through the motions every week.”

Ashlin continued serving until campus attendance skyrocketed and the preschool classes grew immensely. At that point, she was assigned to the same classroom each week with another volunteer, which made Ashlin a consistent leader to the children. This was a challenge she felt ready to take on.

“I thought, I can do this,” Ashlin admits. “I will just do the things I am supposed to do and show them that I can follow the rules really well. I will be dutiful in reading the curriculum beforehand. My basis for doing well was not bringing Jesus to the forefront, but relying on my own abilities.”

Along with the increase in attendance, Ashlin’s class quickly grew to 20 preschoolers. Her self-driven planning and preparation was sidelined and replaced by crowd control. It seemed as though she spent more of her time trying to create order in the chaos than presenting the message, like she thought a good leader should.

But when she could, Ashlin found time to teach the kids stories from the Bible. She desired for them to know that they could trust her. Even more than that, she wanted them to trust someone much better and more worthy: Jesus.

“I saw God work through [the kids] magnificently,” she remembers. In this, God began to transform how Ashlin viewed her role from a weekly duty into a passion. She began to see purpose in her ministry.

Ashlin learned that despite her amount of knowledge or the amount of time she spent in preparation, Jesus was bigger. She was only a part in His plan, and God gave her the abilities to serve Him in her role.

“The little ones display to me parts of the gospel that I fall short of all the time. It is really cool how teaching the gospel definitely grounds me. It is the kids that have taught me that Jesus should always be my focal point.”

After teaching the same group of children for a few years, Ashlin saw one of the young boys come to faith in Jesus and be baptized. She was amazed to hear that the things he learned at Kids Ministry helped him understand the gospel and share it with his friends at school.

“I teared up. I was in awe of what God did. Sometimes I cram God into my little box of what I think He can do. I never thought He could have a 5-year old, out of his own will, want to be baptized, or bring a 5-year old to want to love God like that and share the gospel. You don’t have to be qualified––or have all this knowledge––to share the gospel like I thought,” Ashlin says. “It grew me as a Christian. God has burst out of my little box that I put Him in so many times.

Ashlin just began her fifth year of teaching in The Austin Stone Kids Ministry with a major change. She said goodbye to her original class of children and started with a new group of children who are beginning their journey of learning about Jesus.

“I felt God’s tug on my heart,” she says of moving on to a new group. “He made me see how powerful He was over the last four years of ministering to these kids and their families. He is calling me to do it again. And I want to do it again.”