Changing the World From His Own Backyard 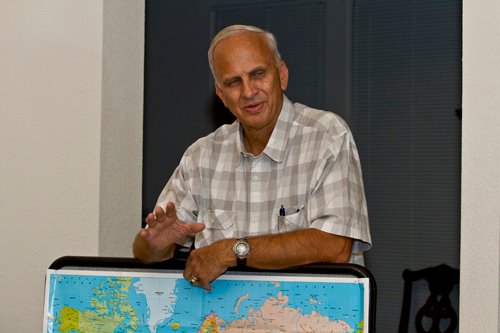 "I can understand how a person could be a Christian in America because everyone is so moral, but I cannot understand how it could be in Moscow," Julia remarked to her newfound friend and mentor Dennis.

Dennis Rigstad knew for years that God was calling him to preach the gospel to the nations, but he didn't realize that quest would bring him to Austin. After multiple careers as a Navy officer, a civilian engineer and a pastor, Dennis and his wife joined a ministry called International Students Incorporated. They relocated to Austin where they now serve students like Julia at The University of Texas.

"It was a year ago," he explained. "We were getting ready to host a group of international students in our home for the UT/Oklahoma game."

Julia came up the night before to stay with Dennis and his wife so she could ride the nearby bike trail early the next morning. That night she explained to them her curiosities about Christ and the gospel. Late the following morning, as Dennis prepped the grill for the coming burgers, Julia came running up from her ride to explain a dream she had the night before.

"'I was in a city I didn't recognize,' she began, 'and a very tall man, so tall that I couldn't see his face, came and put his arm around my shoulder and we started walking down the street. It wasn't like a boyfriend, but I just felt very, very safe.' Somewhere between that dream and the 30-mile bike ride, she put her hand in the hand of that very tall man."

Julia has since finished her time at UT and returned to Russia to teach economics at a university where she is daily imagining how she can tell her students about her faith.

"How many Russian economics students can you and I reach?" Dennis posed. "The essence of my ministry is that there are students coming here from around the world, many from situations where it would be difficult, at best, to engage them because of laws, culture and family. They are here trying to live in an alien land, to make an American friend, to find out what makes America tick. They're engageable. If they go back to their home country and say 'I have an American friend, they are nice people,' we've accomplished something significant. And with most students, that's where it goes, but there are some whose hearts God has softened, who we can share the gospel with, see them come to Christ, and then mentor them so that they go back into their difficult situations as reproducible Christians."

Dennis had expected years to pass before seeing this cycle play out, but God has graciously allowed it to happen during his first year of campus ministry. He looks forward to seeing how God will continue to use him to reach the nations from his own backyard.

The opportunity to impact the nations here in Austin isn't limited to Dennis, though. This Thanksgiving, the For the City Network is helping the Rigstads find 100 volunteer families who will each take two or more international students into their homes for the holiday meal and family time. Most international students never make it into an American home, so this time is special for both guest and host and is a unique and memorable way to impact these students from all over the globe. Having students in your home could lay the foundation for relationships that could lead to the kind of experience Julia had. Host families don't have to do anything different than they normally do. They simply invite these students to join them. Since most international students don't have transportation, host families will pick them up and drop them off that day. Students are paired together to help with the cross-cultural differences.

evangelism
for the city
mission