Better Than a Dream 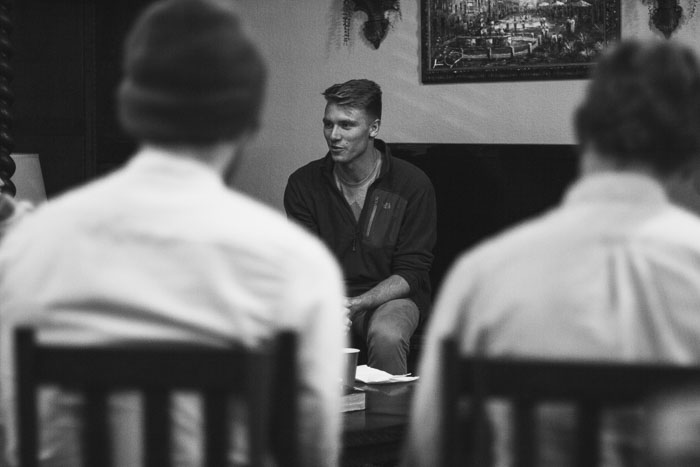 In the summer of 2012, Michael Davis and Seth Dickinson were just out of college. In the same month they transplanted to Austin and found jobs, a church, and each other. They met while serving on the teardown team at The Austin Stone Community Church. Though they’d both grown up with a fondness for the idea of ministry, putting their hands to that plow had always been an afterthought at best. Nevertheless, at their pastor’s suggestion, a year later Michael and Seth decided to co-lead a missional community group at Austin Stone.

Though they aren’t proud of it, Michael and Seth say their motives for leading the group were mixed. Where they had a genuine desire to serve, they also had equal desire for personal recognition. Where they had genuine interest in caring for Jesus’ church, they were also interested in what they could accomplish themselves. And where they had hope for a community to display the image of God, they put equal hope in a community that would reflect themselves.

“I did somewhat want to meet a need at our church,” Michael says now, “but more than that honestly I just wanted to, like, do a good job, to be known as an awesome missional community leader.”

The group formed after meeting in a Connect Class designed to introduce newcomers to others at the church. Though Michael and Seth weren’t in the class, one of their pastors introduced the pair to the class graduates so they could form a new missional community. No one in the group knew each other at all and, apart from being Christians, Michael and Seth remember feeling like none of them were all that much alike.

They began meeting at Seth’s house on Monday evenings, just a few people at first. Seth and Michael prepared dinner and explained how they hoped the group would pan out. Michael reiterated the church’s vision, saying the goal was “to live on mission to make disciples in the city of Austin.” Their expectations were high.

“I was thinking that we were going to have this community that fits together like glue,” Michael says, “like you found your best friends you should have had your whole life and finally you’re all together.”

But after a few weeks, they began to see holes in their hopes. They had shared a few dinners, done a few Bible studies, and only then began to realize that they weren’t exactly on the same page as the rest of their group.

“We can’t even really think about mission right now,” Seth remembers thinking, “because we don’t even really know each other, and some of these people, I don’t know if they’ve ever even read the Bible.”

It was then that Seth and Michael knew Mondays weren’t going to be enough. They were leading a group of strangers, and that’s how it would stay if they gave the community only half a heart and a few hours a week. As farmers approach fallow ground, the two leaders set their eyes on the harvest, cleared their schedules, and started sowing.

What was a divided heart became full commitment. Michael and Seth began praying, confessing, and repenting of their ill motives – not just in private – but also with one another, and then with the group. Their transparency, humility, and faith began bearing fruit and spreading through the group. As personal ambitions were submitted to the Holy Spirit, love became the community’s mark and, slowly, mission became the community’s desire.

Over time, the differences, obstacles, and distance gave way. In their place sprouted empathy, opportunities, and intimacy. The group of strangers became acquaintances. The acquaintances became friends. The friends became family. The family became a missional community.

Tina let down her guard, opened her Bible, repented of sin, and felt loved for the first time in her life. Brett gave up his Sunday morning rest to serve the students ministry. Matt became a church partner and started serving as a greeter on Sunday and in the church office during the week. Becky, Victoria, and Melinda got baptized. Two others joined a different group to prepare to move and serve Jesus overseas.

A year and a half later they’re still meeting – every Monday evening, at least once every weekend, and sometimes for breakfast before work. As steady as their time together is, they’ve diversified their use of it. In addition to the meals, prayer, Bible, and fun, they’ve begun organizing evangelistic outreach and even arranged some weekend retreats.

“God’s view of community probably looks a lot different than what we had in mind,” Seth says, “but when you’re put with so many people who are so different, it reveals so much sin in your life, and through that I’ve seen that it’s way better than what I could want. It’s something that’s, like, saving me.”

Michael and Seth’s missional community in Austin is a diversity, a unity, a collective, a body, a force, a family, an image of God. It is nothing Michael and Seth wanted when they began – but it’s grown into more than they could have dreamed.