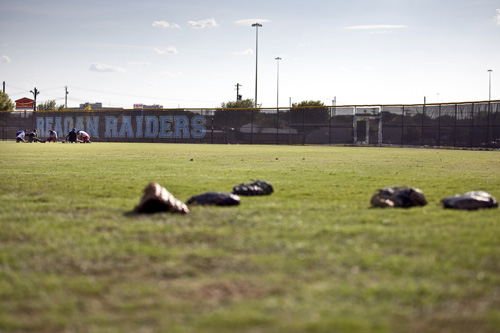 "Nobody had to hold him down when they crucified him. He just took it!" says Angel, a Reagan High School student, as he relates his eye-opening encounter with Christ.

Angel plays for the Blazers, a Reviving Baseball in Inner Cities (RBI) team. Sponsored by Major League Baseball, RBI's mission is to bring baseball back to areas where youth baseball programs have disappeared. Austin's RBI chapter partners with the For the City Center and The Austin Stone Community Church.

Angel and his friend Arturo were in a Bible study last year with the Blazers. Their coaches observed God working in the boys' hearts. Arturo was very inquisitive, while Angel was quieter. During the last study of the year, tears welled up in Angel's eyes as he grasped the truth that Christ was his hope and a Savior who would never leave him.

Blazers coach Sam Bohmfalk, a senior Journalism major at The University of Texas, says of Angel, "He's begun to take on more of a leadership role with our baseball team. ... He's starting to recognize that he can spread the Word of God through doing positive things for those around him."

Sam took Angel and Arturo to Georgia for a Young Life camp. The boys excitedly reminisce about the ride in a charter bus, fishing in the lake, diving, riding the zip line, testing their courage on the ropes course, and lastly, the girls.

Their words pack an emotional punch when they describe how they came to understand God's love. Arturo reflects, "It opened our eyes to what he's done for us. He died on the cross and didn't even move when they stabbed him with the nails. He's done so much; he's forgiven our sin."

Sam has noticed God's redemptive work in Arturo. He says, "He's begun to pray and think about his life. He used to gauge whether or not he should do something by what the world around him would say, but now he has taken the approach of asking the question, 'Is this pleasing to God?'"

Arturo and Angel both recognize that their view of God has changed. Arturo says, "I wasn't into God. It was a rare occasion that I needed him. I didn't think of him or pray at night. Now I talk to him. I read the Bible. It's hard to read, but interesting."

Angel and Arturo have dreams for the future and hope to help their families go deeper than their own ambitions. As Arturo observes how hard his dad works, he desires to help provide for his family financially through going to college and playing professional baseball. Angel, who would like to be a Marine, shares this desire to provide for his family.

Arturo is full of gratitude for what God has already provided for him. He says, "I am blessed! God has given me this opportunity to play baseball and to make friends. I thank God for the field, the batting cages, and the equipment he's given me!"