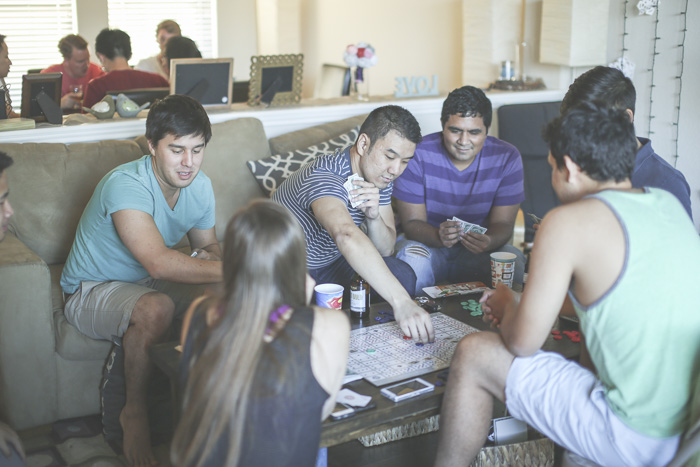 Four years ago, Jesse decided to buy a house. He wanted his future home to be a place that God would use to further His kingdom. Though Jesse was only 24 years old and didn’t have much money, God provided in order for him to afford the house that he and his wife, Rachel, now call home.

“He made it very clear to me that He didn’t just give me this house so I could have a nice place to live, but that this house was a gift from God—to be used as a tool for ministry.”

Obeying God’s call to invite others in, Jesse and Rachel began to open their home each week for missional community gatherings. During that time, their group would sing worship songs, pray for each other, discuss the sermon, and go through a devotional together. However, they still felt conflicted and broken over the lost people in their lives.

Each member of the group had a deep desire to share the peace and fulfillment they found in Jesus with others who did not know God. “No matter how hard or uncertain things are,” Rachel says, “I can rest and pray to the God who controls all things and who gives me certainty that He is good.” Knowing this truth, the group knew that they were compelled to share God’s love and grace with people at their workplaces and in their neighborhoods.

So, Jesse and Rachel’s missional community group took action, incorporating a “third place” into their weekly meetings, in an effort to engage their friends who may not know Jesus. Their third place was a neutral, safe, and fun environment where they simply hung out, played games, and got to know each other. Usually held at Jesse’s home, they invited their lost friends, neighbors, and coworkers to join them. “We pursue them because we hope that God will call them to Himself and allow our missional community to witness that call and response,” says Rachel.

Many people have walked through the doors of Jesse and Rachel’s home and experienced a biblical community that reflects Christ’s love. One day, Ivy, a member of their missional community group, reached out to a coworker who had just arrived in Austin and did not have a place to stay. Ivy knew her coworker didn’t know Jesus, and that her coworker was going through a difficult time in his life. Not wanting this coworker to spend another night without a home, Ivy asked the group for help, and Jesse and Rachel welcomed Ivy’s coworker into their home. Ivy and her coworker began commuting to work together and talking about God.

The environment of third place also served as a catalyst for growing relationships. “These gatherings are a lot about conversation starters and relationship building, becoming friends, and making connections,” Jesse says. Drawing people in to a third place has prompted many discussions about God and the group has heard vulnerable stories of past religious experiences. The people in Jesse and Rachel’s missional community group have been able to engage their non-believing friends, listening to them talk about their doubts about God or church … and lovingly point them to Jesus. Though none of their coworkers or friends have come to know Christ, many have come to church on Sunday and some have even started reading the Bible.


Reflecting on the joy they have all witnessed and felt through third place gatherings, Jesse remembers a game night they hosted recently. “We had over 20 people in our house. It was our biggest third place yet. Then, because of the relationships built, they came back again and again.” As a result, they have even seen group members and friends organically meeting together outside of regular missional community gatherings.

As God continues to bring more people through the doors of their home, Rachel, Jesse, and the rest of the group have started a Bible Study that helps equip them to share God’s Word with the new friends they are connecting with at their third place. “It is exciting when you are able to give in that way. It wouldn’t be fun at all if we just lived in this house and used it only for ourselves,” says Jesse.

Rachel agrees, “This space is God’s and we want to use it the way God intended. I think it can be tiring, but getting to celebrate what happens is totally worth it. My prayer is that God saves people in this house. So, whatever it takes.”