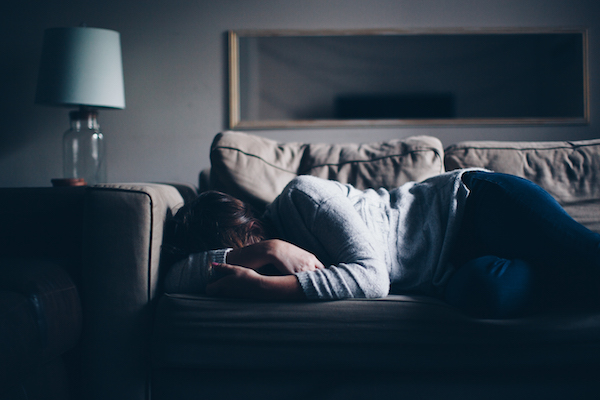 There’s no way I’m going to live to see my thirties, thought Anna as she lay in bed, unable to move. I give up.‍

Seven years earlier, death wasn’t on Anna’s mind. Fresh out of college, engaged, and working as a stockbroker in northern California, her pursuit of the American dream was going as planned. Life was good.

During this time, God wasn’t on Anna’s mind, either.

“I stopped going to church when I was 14,” Anna recalls. “I thought Christians were naive, uneducated, and hypocritical. I was convinced Christianity wasn’t the truth, and there had to be something else.”

Her “something else” was the American dream, and her pursuit of it quickly led her to physical and emotional burnout. Right around the same time, Anna quit her job as a stockbroker, and her engagement unexpectedly ended, leaving her with no job and no one to turn to.

After a year of looking for other work, Anna decided it was time for a change. With nothing to lose, she decided to move to Austin in search of a fresh start. She got rid everything she owned, packed her car, and made the drive to Austin. She arrived with no job, no place to live, and no community.

“Every day was like having the worst food poisoning of your life. I couldn’t really work or function,” Anna explained.

For three years, Anna endured an endless, hopeless cycle: her stomach got upset, she took antibiotics, her stomach felt better, and a few months later the sickness returned. The cycle continued until Anna depended on daily antibiotics to function. Because no doctor would prescribe that amount of antibiotics, Anna had to find her own solution.

Determined to take care of herself, she desperately tried any medication, natural health remedy, cleanse, or diet she could find. Finally, she found an infectious disease doctor who agreed to prescribe enough antibiotics to last Anna a full year. While it was enough to help her function, Anna was far from thriving. “I was depressed and stopped caring. I was just trying to get through each day,” Anna remembers. “I had no life, no friends, no hobbies. I didn’t have much hope.”

Then Anna suffered a torn tendon in her back that took away her ability to walk. She was bedridden in the hospital until she healed enough to regain use of her legs. A second back injury a few months later sent her back to bed, and when a car accident the next year sidelined her again, something in Anna broke.

“I remember lying in my bed, unable to move my head and still getting sick. It was the first time I’d let myself feel the pain of it all, and I couldn’t handle it anymore,” Anna said.

Until that point, Anna’s focus had been on finding a remedy to heal her body. Faced with the idea that she might not live to see her 30th birthday, her focus turned to what would happen after death.

Anna was convinced that New Age spirituality was the answer. Desperate to find the truth, she researched shamans, studied meditation techniques, and went to drum circles. “But everything I read kept pointing me to Jesus,” Anna explained. “I read a book about a man who wanted to become a shaman. I thought it was the story of how he got there, and I was ready to follow in his footsteps. At the end of the book, he ended up coming to Christ. The book was actually his testimony.”

Shortly after finishing the book, she heard about The Austin Stone Community Church, and for the first time in 15 years, she walked willingly into a church service looking for answers.

The sermon that night was on grace. The pastor explained that believers don’t have to clean themselves up before going to God, and he encouraged the church to go to God first and allow Him to heal them. Anna had never heard a message like this before, and it didn’t line up with her perception of Christianity. She walked out of church that night with an insatiable desire to learn more.

“From that point on, I started reading the Bible and couldn’t get enough of it. God was truly pursuing me through His Word."

Eventually, God led Anna to John 14:6, which says, “I am the way, the truth, and the life.” Anna realized she had found what she had been searching for all along. In that moment, she confessed to God, I believe that You are the Truth."

While God had revealed Himself to Anna, her body still suffered. She had suffered an unhealthy amount of weight loss due to malnourishment and still struggled with loneliness on a daily basis. Yet, amid her sickness, Anna sought to learn everything she could about Jesus and how He called His people to live.

The more she read the Bible, the more she felt the Holy Spirit’s conviction in her heart. She began to understand the difference between adhering to a belief system and having a personal relationship with Jesus. This conviction led her to repentance and a true dependence on Jesus for her hope and salvation.

“The Lord truly took me to the point of having nothing to rely on but Him,” Anna explains. “He wiped everything from me—finances, relationships, health. I had nothing but Him, and it was okay. He’s all I need.”

During this time, Anna’s body slowly started to heal as well. She discovered a treatment that alleviated the worst of her symptoms, and she worked with a nutrition scientist to restore her health. After seven years of physical suffering and a slow journey toward healing, Anna was able to completely come off all medication.

Anna’s desire to know Jesus more and to share the truth of the gospel is now the driving force of her life. After years of living in isolation, Anna is involved in a Missional Community group that meets on a weekly basis, and she’s been blessed to form deep friendships with many of her brothers and sisters in that group. They share life and study the Scriptures together, encouraging each other and praying for one another.

“I didn’t know Jesus until I was 31. That’s a long time to not know the Truth,” Anna confesses, with tears in her eyes. “Jesus is very real, very personal, and I want people to know Him. That’s what I want to do with my life.”