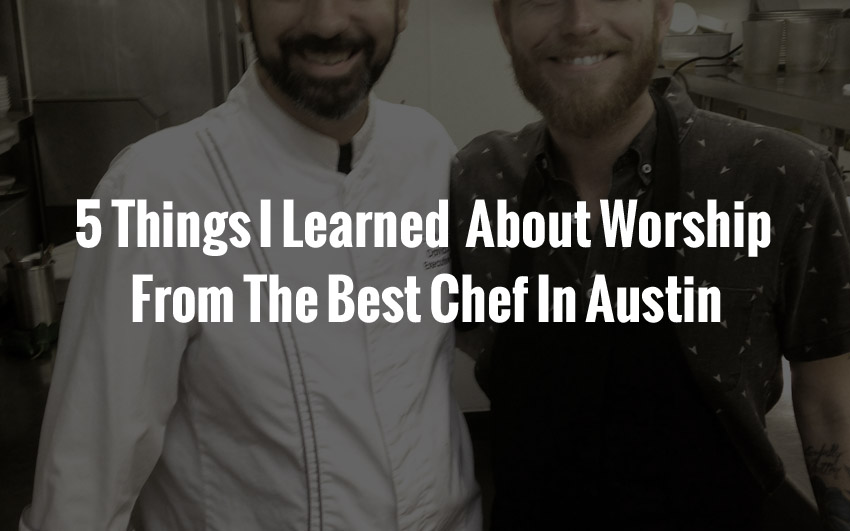 My friend Chef David Bull is the Executive Chef at Congress and Second Bar + Kitchen in Austin, Texas. These are two of my favorite restaurants in town, and both have won enough awards to fill up an entire blog. “Esquire Magazine” recently called Congress, “one of the nation’s best new restaurants.” He has been nominated twice for the prestigious James Beard Award, and after spending an entire day with Chef Bull in his kitchen, I understand why.

Chef Bull recently invited me to hang out with his team in the kitchen for a day. He knows how much I love food and cooking, and I was thrilled to take a peak inside of what is arguably Austin’s best restaurant.

David handed me an apron and immediately put me to work. He introduced me to his staff — pastry chefs, sous-chefs, and cooks — hands-down some of the most talented and kind people in Austin, Texas. They work all day long to prepare for dinner at Congress, which starts at 6pm. Hours of preparation, hours of cooking, hours of work, every day.

I prepped, chopped, watched, listened, and learned. And after spending nearly eight hours with this five-star team of amazing cooks, I realized I was learning more from him about worship than I was about food.

As an artist, songwriter, pastor, and leader in the local church, I have a high expectation for things to look beautiful, sound beautiful, and portray a sense of being excellent. I want our music, sermons, audio, environments, graphic design, communication, lighting, parking lots, and foyers to all be excellent! But, at the end of the day what does it really mean to pursue excellence in what we do?

David’s team spends the most part of every day in preparation for three hours of dinner service. Starting in the morning, they prep menu items, chop garnishes, make sauces, and plan every detail of the dinner service. Every reservation has details including food allergies and preferences, and as David meticulously goes through each one, notes are made on how plates will be affected.

There aren’t many items on the menu at Congress, but each one takes an insane amount of time, planning, and detail. And by the time a finished plate arrives in front of a patron, it took nearly every hand in the kitchen and every hour in the day to complete it. The finished products are masterpieces — stunning to the eye, even more stunning to taste.

While I stood for hours watching — and somewhat helping — them prep, I couldn’t get away from this thought: If these chefs are willing to put this much time into food, food that will be consumed and perish, how much more should we be willing to put diligent time into preparing for every single Sunday in our churches!

A time-consuming aim for excellence should have it’s affect on everything we do.

Writing & Arranging Songs
It should take months and months of rehearsal for a new song. We can’t be afraid to write, rewrite, rearrange, try, toss, delete, and rewrite. The preparation of songs is just as important as the actual delivery.

Prepping the Set List
If excellence takes time, then it’s not adequate to pick some songs, simply run through them in a rehearsal, and move on to the next thing. Planning a set list and Sunday liturgy should be top priority, and there should be plenty of time to practice transitions, what you’re saying, where you’re going, and how you’re going to get there. Well-rehearsed set-lists become natural-undistractingly-excellent set lists!

Prepping the Heart
John Piper has some powerful thoughts on the preparation of the heart for worship leaders:

“There are Saturday night ways that ruin Sunday morning worship. Don’t be enslaved by them. Without sufficient sleep, our minds are dull, our emotions are flat, our proneness to depression is higher, and our fuses are short. My counsel: decide when you must get up on Sunday in order to have time to eat, get dressed, pray and meditate on the Word, prepare the family, and travel to church; and then compute backward eight hours and be sure that you are in bed 15 minutes before that. Read your Bible in bed and fall asleep with the Word of God in your mind. Saturday is not the night to stay out late with friends. If there is a special late night, make it Friday.”

You do not stumble upon excellence, you have to war for excellence.  About an hour before food service time began, I felt the entire kitchen turn to war-time. All playfulness stopped as everyone put their game-faces on. You could literally feel the seriousness ramp up as it got closer to 6pm at Congress.

Throughout the evening, David was never afraid to demand excellence from everyone in the kitchen. If a ribeye wasn’t prepared correctly, it was cooked again. If an appetizer wasn’t plated correctly, with the right form and shape, they started over. Time and time again, I saw conflict in the kitchen making for a better finished product.

In ministry, aiming for excellence means having hard conversations. It means sometimes telling someone what they are doing isn’t good enough, or telling them they aren’t ready, or bringing correction when they drop the ball. As leaders, we can’t be afraid of hurting someone’s feelings on our team. Correction must come with grace, but lack of critical feedback always leads to mediocrity.

Some of you have team members that need correction, but you’re afraid of the conflict and instead settling for something that is mediocre. Others of you are afraid of failure, so you’ve stopped taking risks in writing and dreaming. You’re terrified of the conflict that might come if you do something wrong. I understand this completely! There’s a real tendency in church leadership to settle, but Jesus always brought out the best in people. Don’t be afraid of conflict. Excellence demands it.

Chef Michelle (pastry chef) handed me three silver bowls, a pair of tweezers, and a pair of tiny scissors. In one bowl, there was a pile of greens that looked like weeds from my backyard, while the other bowls were empty. “OK,” she said, “this is going to be garnish for one of the dishes tonight,” she said. “I want you to take these tweezers and scissors and find ONLY the perfect leaves. If there are any blemishes, any brown spots, tears, or holes, discard them. But when you find an un blemished one, cut it with the scissors and place it with tweezers in the empty bowl. I want only the very best leaves for the garnish.”

For nearly 2 hours, I stood with tweezers and scissors, selecting only the best leaves. At the end of 2 hours, I had a tiny bowl of beautiful leaves. When the final dish was plated at the end of the night, it was of course beautiful.

Every SINGLE detail of what we do matters — every conversation, every rehearsal, every comment, every chord, every lyric, every word, every slide on the screens, every chair, every service, every swell, every transition, every drum fill. Just like pruning for the right green leaves, every work of our hands must have careful attention to detail.

As the artist and worship leader, you must give attention to details! Chances are you’re the only one with that role. As ministers of excellence, you have to be a master of the details, paying attention to every part. Nothing is insignificant. You know the saying, “Don’t sweat the small stuff?” Delete it. The smallest details matter!

I left the kitchen of Congress completely inspired. I wanted to go create. I wanted to head home, throw away songs, and start over. So, I did.

When we see amazing beauty, we want to go create. When we hear a great band, or listen to great songwriting, we are usually inspired to go practice! When we see amazing things in creation, it compels us to worship God. Why? Because excellent people inspire excellence. Excellence is always contagious.

Look around at the people surrounding you. What kinds of people are you attracting? If you’re surrounded by apathetic, complaining, cynical, and bitter artists and musicians — chances are they are catching that from you. Creative people are attracted to creative people, and one of the keys in building an energetic and dynamic team is first making sure it’s a value you possess. Is your leadership contagious with excellence? If you’re leading with passion, urgency, and charisma, your team will most definitely churn out excellent things, and further, they’ll see God in the process.

I’m grateful for my friend, Chef Bull. He’s a man that strives for excellence and creativity. His team is healthy and loves him, and the food they prepare is outstanding! We can all learn a lot as we see diligent chefs doing what it takes to prepare the absolute best for those looking to enjoy a fine dining experience.

One of my favorite examples in the Scripture is Daniel. He was just a simple dude, but God used him in incredible ways in the life of the king of his nation.

Then Daniel became distinguished above all other presidents and satraps, because an excellent spirit was in him. And the king planned to set him over the whole kingdom. (Daniel 6:3)

Why did the King pay attention to Daniel? The king had anything he wanted, anyone he wanted, but he listened to Daniel. Why? Because Daniel was very good at what he did. Daniel was a man of excellence. God gave Daniel an excellent spirit, and excellent knowledge, and an excellent ability to interpret dreams. Daniel’s excellence was the vehicle that God chose to make Himself known to the king.

I know this conversation around excellence is hard for some to read. In many ways it is easier to settle. We must fully realize that settling for mediocrity in ministry and claiming grace belittles God. Conversely, giving our absolute best and begging for grace glorifies God!

As we serve the church every single week, I hope that we can be men and women who steward our talents and abilities well so people will see God! Matthew 5:16 says, “Let your light shine before others, that they may see your good deeds and glorify your Father in Heaven.”

So, may you, my friends light up! Light up now! Your excellence may be the vehicle that God chooses to make Himself known. May the world see your good works — your excellence — and like a wild, contagious, inspiring, compelling fire, give glory to the Father who is in Heaven.